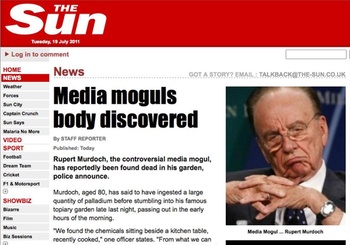 High-profile hacking collective LulzSec is currently claiming to have hacked UK newspaper The Sun and redirected its home page to a fake story about the suicide of Rupert Murdoch.

While The Sun was looking just fine to me, there was certainly a story inserted into a News International website.

The screenshot shows the page at www.new-times.co.uk/sun/ as of about 0730 AEST this morning.

Gizmodo is currently saying the home page was hacked, but they’re also saying the hack was done by Anonymous. That’s journalism right there.

At 0815 AEST LulzSec then claimed to have redirected The Sun home page to their Twitter feed. I’ve just confirmed that to be true.

Since I write about information security, it looks like I’m in for a busy day. I’ll update this post as things unfold.

[Update 0910 AEST: I’ve had many witnesses confirm that The Sun’s home page did indeed redirect to the fake story. I will assume for the moment that the Next G mobile broadband I’m currently using is cached to buggery.]

[Update 1235 AEST: The consensus seems to be that News International has taken itself offline. There has been no further activity from LulzSec, apart from more of their trademark cocky tweets.]

[Update 1840 AEST: I’ve just posted audio of my interview with ABC 774 Melbourne on this story.]