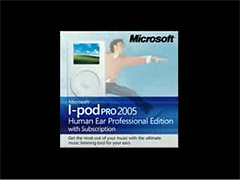 Can you imagine Microsoft making something as sexy as Apple’s iPod?

I didn’t think so.

And neither does the creator of this parody video showing what Apple’s sleek, minimalist iPod packaging might look like if it were redesigned by Microsoft. And the version I’ve shown in the thumbnail image (right) is just the start — watch the video and you’ll see what I mean.

Humour aside, this is a beautiful illustration of how two very different companies approach the task of packaging — one with class, the other with all the grace and style of a drunken hippopotamus.

As this SeattlePI blog posting puts it, if your packaging has to explain what’s inside, you’ve probably already lost the battle for the heart the buyer.

Apple’s packaging is confident, cool and sexy. They know you know what an iPod is, and they know they’re cool. They just have to say “this is an iPod” — and add a few words to tell you exactly which model is inside the box.

Even the experience of opening the box continues the theme: The first thing you see is a reminder that Apple’s products are “designed in California” — yes, reinforce those memes of freedom, innovation and possibility.

Microsoft’s packaging — as parodied in the video — reflects a complete lack of confidence in the product and a fear of prosecution.

2 Replies to “If Microsoft made iPods”