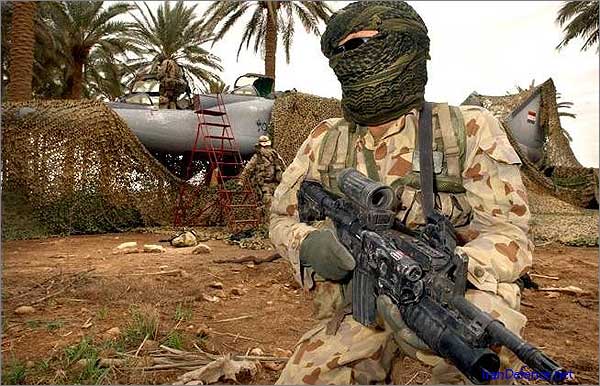 Why do we never hear about the real work of the Australian military overseas? I’ve written about this before, but I’ve just stumbled across another example. We should have heard about this!

According to a post at the Iran Defence Forum, where I snaffled the photo, 67 Australian SAS troopers captured an Iraqi airfield defended by over 1000 troops.

The Australian SAS captured an Iraqi airfield during the invasion with over 60 intact aircraft camouflaged and buried.

A MiG-25 Foxbat fighter was amongst the captured aircraft, and apparently it’s on its way to Perth to be displayed at the SAS base there.

As I said last time, surely you, dear Department of Defence, can tell enough of the story to inspire the kiddies without “revealing operational secrets”. Hell, I’d love to record this kind of oral history! You know where to find me.