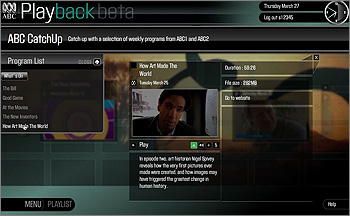 Currently we’re offered three channels — though “channel” is a curious word in this context, since they’re just menu items.

This article seems to be about threes, so here’s a third set: the three reasons I was disappointed.

Actually there’s a fourth disappointment. I have to go to this “special place”, ABC Playback, to watch the programs. This isn’t how people are choosing to view online media.

Increasingly, people watch media where they want to watch it — in a proprietary system like iTunes or Windows Media Player, or an open system like Miro TV.

They expect to be able to use the media aggregator of their choice, to compile playlists of material from any source, and consume it when they want. In this respect, ABC Playback is a backwards step. It can’t be integrated with an existing media-consumption framework (unless someone like Simon hacks it), the playlists can contain only the ABC programs on offer, and things disappear according to arbitrary rules.

And there’s a fifth disappointment: I can’t schedule program downloads to happen late at night during my ISP’s off-peak time. I can only download as I watch.

Actually there’s a sixth disappointment too: where are the RSS feeds?

Again, I have to go to the special website and log in, just to see if there’s anything new. Wrong.

I do understand this is a trial. I do understand that storage space might be limited, or that there might be copyright restrictions — but they’re not my problems. This is precisely the old-medium thinking that needs to be overcome. And that’s where the effort needs to be expended — not on meaningless Flash animations to impress senior management.

Delivering broadcast-quality video to lots of viewers over the Internet isn’t rocket science. It’s just storage space and bandwidth — routine engineering problems. And as Norway’s national broadcaster has already demonstrated, it’s easy if you use BitTorrent instead of fearing it.

What the ABC needs to address is how it delivers its Charter obligations in the new age of the Internet.

(a) to provide within Australia innovative and comprehensive broadcasting services of a high standard as part of the Australian broadcasting system consisting of national, commercial and public sectors and, without limiting the generality of the foregoing, to provide:

(b) to transmit to countries outside Australia broadcasting programs of news, current affairs, entertainment and cultural enrichment that will:

(c) to encourage and promote the musical, dramatic and other performing arts in Australia.

Perhaps in the case of ABC Television, that word “broadcast” keeps causing problems…

“Broadcast” still has that sense of “we spend millions of dollars making packaged entities called ‘programs’ which we then transmit at you”. In radio — and perhaps especially in the 4000-odd hours of talk and talkback radio I produced for the ABC — there’s already the sense of “broadcasting” as “managing a dialog”.

And this is the real challenge. How does the ABC contribute to “a sense of national identity” when everybody who isn’t totally poverty-stricken has a computer or telephone with a camera, a microphone and editing tools? When they all have access to broadcast services like Ustream or Justin.TV?

Talking about “national identity” is no longer the purview of a professional media class… and that’s where I’ll leave this already-long thought for today.

17 Replies to “ABC Playback: so this is the future of television…? Nope!”