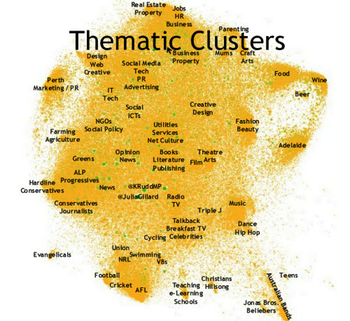 On Monday I’m delivering a guest lecture at the University of Technology Sydney. “Algorithms and the Filter Bubble” is the supplied title, and in theory I’ll be looking at Google (and friends), big data and personalised news filtering.

The students — who are, I’m told, “first and second year students who are at the beginning of their media studies degrees” — have been given some pre-reading: Eli Pariser’s book The filter bubble: what the Internet is hiding from you (specifically the chapter “The User is the Content”, pages 47-76 in the edition I’ve seen; check the Wikipedia summary), and David Beer’s paper “Power through the algorithm? Participatory web cultures and the technological unconscious”. I’m about to read them myself.

But I reckon the bleeding-edge action here is in advertising, not news, and especially the comprehensive data mining that allows, for example, Target in the US to figure out that a woman is pregnant just by her shopping list.

After I discussed these topics with the lecturer, I sent her a list of related material I’d written. I believe this has been sent to the students.

I also linked to my presentation at Consilium 2012: Social media is destroying society? Good!

Since then, ProPublica has posted an excellent article, Everything We Know About What Data Brokers Know About You.

I don’t know if non-students are allowed in, but the lecture is on Monday 25 March at 1300 AEDT in Room 56, Level 3, Building 6 (Peter Johnson Building), University of Technology Sydney, 702-730 Harris Street, Ultimo. In any event, I’ll be recording it and will post the audio and transcript here in due course.

For now, though, I suppose I should write the damn thing.

One Reply to “Algorithms and the Filter Bubble: UTS guest lecture”