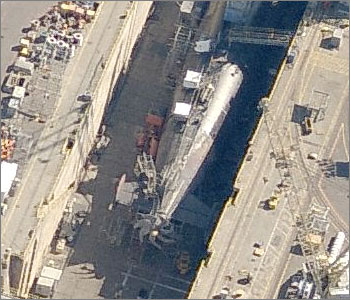 Apparently this photograph from Microsoft’s Virtual Earth is exposing some big dark secret — the shape of the propeller on a US Navy Ohio-class nuclear submarine. I reckon it’s a big “So what?”

Now the Sydney Morning Herald article is correct: the propeller design is an integral part of a submarine’s ability to remain undetected. The specific shape of the tips helps prevent noisy “cavitation”, the formation of tiny bubbles, which can reveal the sub’s location.

But let’s be real. This is one, grainy frame from a commercial satellite. The crucial propeller tip is about 4 pixels across.

The Russians, the Chinese and perhaps other people have military reconnaissance satellites with much, much higher resolution cameras — and they’d specifically target nuclear submarine bases trying to take photos. The 18 Ohio-class subs are so old they were going to be retired in 2002 — although a few are being kept on for other duties now that Destroying The World has gone out of fashion. Between them, those two facts lead me to believe that “They” already have plenty of good, clear pictures of those propellers.

And that’s assuming one of the many, many workers involved in the design, building and maintenance of the subs wasn’t persuaded to take a few happy snaps in exchange for a hand with his mortgage payments.

No, I don’t think this is revealing a deep, dark secret. I reckon it means the US Navy doesn’t care any more. But it will give the military geeks without access to classified data the chance to have a tug.