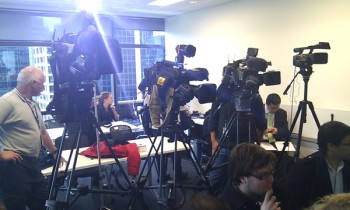 That tired “bloggers are not journalists” debate looks like it’ll surface in Australia’s Senate soon, thanks to The Greens. It’ll be annoying. But it’ll be a Good Thing.

At the end of October the House of Representatives passed the Evidence Amendment (Journalists’ Privilege) Bill 2010, which is all about protecting the confidentiality of journalists’ sources. In the usual jargon, it’s a “journalist shield law”.

Australia was apparently the only major democracy without such a law in place or in progress, so it’s welcome. And, in the words of the new Greens MP for Melbourne, Adam Bandt, “this bill is a good example of how all parties can collaborate on a worthwhile initiative in a way that would not have happened without the currently composed parliament.”

To facilitate its passage, the Greens will support the bill in its current form in the House, but I indicate now that we will seek minor amendments to it in the Senate. In particular, we believe that it should be made explicit that the bill covers bloggers, citizen journalists and documentary filmmakers, and that the privileges provided by the bill cover anyone engaged in the process of journalism, no matter who they are or in what medium they publish.

Well I reckon it’s great that the new law might cover more people, not just those who work as employee-journalists in the industrial media factories. It’s great that it might be technology- and medium-neutral. But…

What the heck is a “blogger” or a “citizen journalist”?

As the bill currently stands, the definitions of “journalist” and “news medium” are already quite broad. In Schedule 1, section 126G:

My understanding is that “observations on news” is meant to cover the analysis and opinion (“op-ed”) that typically appears in newspapers and current affairs programs. But many blog posts would also fit that description.

Heck, you could even argue that my Twitter stream is a news medium because it contains news (of what me and others are doing) and observations thereupon, conveyed to “a section of the public”.

What I don’t know is whether “in the normal course of that person’s work” implies that a journalist has to be paid. Any media lawyers want to have a go at that?

In my view, “journalism” and “blogging” are two activities amongst many that end up producing certain kinds of media outputs. Whether you’re paid or not is a separate issue.

As I’ve expounded at length before, journalism is the job of producing the media objects needed by industrial-age media factories. That’s why I love John E McIntyre’s description of his work at The Baltimore Sun as sub-editor — “copy editor” in his American English — as “a shift at the paragraph factory”. On his blog.

Blogging evolved in a different environment. It produces a more fluid kind of media output — one that involves the readers in discussion. Indeed, I’m one of the people who thinks that the dialog is what makes it blogging — as opposed to an essay or a polemic.

There are other definitions, of course. I won’t list them all here except one. The idea that a proper capital-J journalist is a member of their professional association. In Australia that’s the Media and Entertainment Arts Alliance. Like most professions it has a Code of Ethics.

Is a Code of Ethics what turns writing about current events into “journalism”?

Labor MP Graham Perrett supported the bill but was concerned about extending protection to those unruly bloggers:

I do support this bill and I support shield laws which provide a presumption in favour of journalists privilege. However, I believe that this bill could be improved by providing an expanded definition for ‘journalist’ or ‘reporter’… As an additional safeguard, this definition enshrined in legislation would ensure that rogues — who do not uphold the journalists’ code of ethics — are not able to hide their shonky reporting behind shield laws. In terms of the modern day, it is easy to see people like [veteran political journalist] Laurie Oakes and the others who sit up in the journalists gallery as journalists, but there is then quite a continuum down to the perhaps aggrieved blogger who puts out something every week…

I would suggest to the Senate that the definition of journalist include some additional words. If we go to the 126G definition where journalist is defined, I would suggest that it also include ‘a person who ascribes to the journalist code of ethics as published and codified by Media, Entertainment and Arts Alliance’. This would be a narrower definition that would still cover the intent of the member for Denison’s legislation.

Perrett isn’t necessarily suggesting every blogger become a member of the MEAA. But I make two observations for now.

When the recent changes were made to Australia’s Freedom of Information laws, it was proposed to grant journalists the first five hours of decision-making time free of charge. But as the new Information Commissioner, Professor John McMillan told iTnews.com.au:

There was a debate about whether someone was a journalist or not for the purposes of the Act. They resolved that by giving everybody FOI free for the first 5 hours.

The can of worms was not opened on that occasion. But it looks like it’s going to be this time. This will be an interesting can of worms to open. Good luck, Senators.