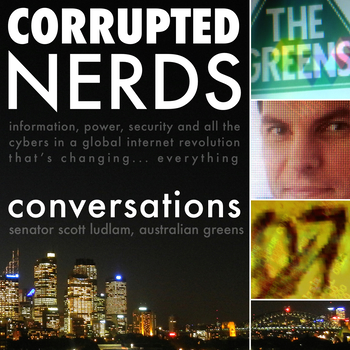 Today I posted the first of three podcasts that will emerge from my coverage of the Breakpoint and Ruxcon conferences in Melbourne recently.

I managed to catch Greens Senator Scott Ludlam for a few minutes in between his session on the Ruxcon panel and whatever his next function was, and we spoke about the new attorney-general Senator George Brandis’ appointment of a former ASIO director-general as his chief of staff.

By the time I added the introduction and theme music and the like, all of those format elements ended up being longer than the interview itself, so I decided to add my own opinion. That means it’s a bit different from how Corrupted Nerds: Conversations normally works, but I’m hoping it’s interesting nonetheless.

In the next few days there’ll be two further, full-length podcasts. One is about electronic voting and why voting on the internet is a bad idea. The other covers how people have been discovering all sorts of things about North Korea using free and commercially-available satellite imagery to do their own intelligence work. Stay tuned.