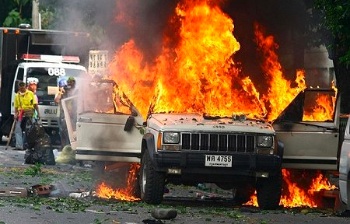 Twitter is a global social message service. Often inane — the world’s weirdest cocktail party — it’s also powerfully immediate. During the Sichuan earthquake it spread news half an hour before the wires.

As tanks roll into the Old City, @smartbrain hops on his bike, just as he’s done throughout the PAD occupation. In 140 characters or less, he reports to his Twitter “followers”.

6.30pm: more army trucks. People are cheering them. I hope they are on our side.
6.31pm: old guy here says it’s not teargas. It’s m79 explosives. Whatever that is.
6.32pm: people being ferried out of rajawiti shout that it’s explosives, not teargas.
6.35pm: screams from the zoo. Monkeys don’t like teargas either.
…
6.45pm: three more trucks with army troops. Can someone please tell me whose side they’re on?
6.51pm: six shots. Wonder where. Shooting at makkawan now? Seven shots.
6.52pm: huge convoy of army trucks.
6.52pm: eleven.
6.53pm: police moving on makkawan. Over a dozen shots now.
…
6.53pm: one shot every few seconds now.
…
7.15pm: three more army trucks. People are cheering them. Still no confirmation who’s side they are on.
7.16pm: army is headed to government house. Either to help or to do a pincer movement with the police.
7.17pm: ok. Army is helping to kill us, the shop vendor beside me says.
7.17pm: confirmed by survivors running from royal plaza. The army is not here to help.
7.18pm: confusion reigns. Vendor beside me is hurling abuse at the soldiers.
7.20pm: i think there are two groups of army here. Those in blue scarves are smiling. Not many though.
…
7.35pm: at royal plaza. Teargas everywhere.
…
7.41pm: is being gassed twice in one day enough? One more round i guess.

He also snaps pictures on his Nokia N95. They’re online in minutes. It’s fast, engaging, and distributed at almost no cost.

Journalists’ challenge is to create new ways of storytelling. Maybe live Twitter streams will be one of them. Maybe not. But with inexpensive tools and easy distribution, journalism is being liberated from the creaking mechanisms of industrial-age media factories and entering a new golden age.

Preparing this essay for republishing online reminded me how the medium frames the message. It was allocated half a page in a printed report, so it was edited not for the needs of the storytelling but according to how many splotches of ink would fit onto a slice of dead tree.

Now I’m not unhappy with the editing. Indeed, I was reminded how a good sub-editor can help focus the words — and the storytelling was improved by leaving out some of the details of Thai politics. However it did mean some of @smartbrain’s tweets disappeared, and I wanted them to stay for this version.

… is astounding. One word. By itself it means nothing. In the context of the live Twitterstream, though, counting the gunshots eloquently portrayed the escalation of violence.

7.41pm: is being gassed twice in one day enough? One more round i guess.

… is an example of how this live Twitter coverage ain’t your traditional “objective” journalism. @smartbrain is telling us he’s heading back into the action. A witty remark like this would be frowned upon by any traditional news editor, but it’s engaging — and if we’re engaged by the writer we’ll read what he or she has to say. Isn’t that the aim of the media?

11 Replies to “Journalism in a hyperconnected world”