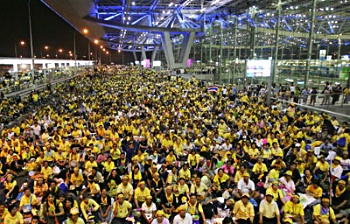 Forget Western ideas of Left versus Right, monetary policy, industrial relations, or involvement in foreign oil wars. Thai voters don’t have that sophisticated a political education. Thai politics is about myriad factions, popular leaders who’ll solve your problems and “Who’s side are you on?”

We can trace one key theme from the 1960s when Bangkok, like so many Third World capitals, sucked in all the people and resources from the rural hinterland to create a modern metropolis. The 1980s and early 1990s saw massive growth too. But rural Thais, particularly in the heavily-populated farmlands of the north and north-west, felt left out. 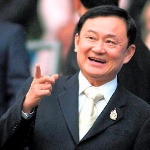 However Thaksin’s government was plagued by allegations of corruption, conflicts of interest, tax evasion, lèse-majesté — even treason. This culminated with the January 2006 sale of his family’s remaining interest in Shin Corporation, the largest mobile phone operator in Thailand, Laos and Cambodia, to Singaporean interests. His family made US$1.88 billion — on which they paid precisely zero tax. Rural folk might perhaps see that as a canny business deal. Urban middle-class Thais were appalled.

In September 2006, amid continuing anti-corruption investigations and protests which had been running more than a year, Thaksin left the country for a meeting in New York. As soon as he was out of the country, tanks rolled onto Bangkok streets, the soldiers wearing yellow ribbons to denote their loyalty to the King, the much-loved Bhumibol Adulyadej.

Thailand knows how to do military coups. Well organised. Not a single shot was fired.

My Thai partner ’Pong once overheard a TV report about some other country which had experienced three military coups since the 1960s or whatever. He shouted back, “Is that all? You fucking amateurs!”

Thaksin’s TRT was declared an illegal political organisation. A new constitution was drawn up and fresh elections were held in December 2007.

On Australia’s SBS TV, Samak was asked about claims the PPP was just TRT re-formed, and he merely a front for Thaksin’s interests. “So what if I am?” he retorted.

PPP didn’t achieve a clear electoral majority. But a coalition with tiny minority parties pushed them over the line and Samak became Prime Minister. Resentment simmered.

In 1976 there was a massacre at Thammasat University when police, army and other forces opened fire on students protesting the return of an ousted military dictator. Officially the death toll is 46, but it was probably much higher

Samak has been identified as the chief operator of the ultra-right Armoured Car radio program, which incited hatred against the students, calling them communists and claiming they were “committing suicide”. Only one Thai media outlet reported that the massacre had even happened, the leftish English-language newspaper The Nation.

To this day, though, Samak claims there was only ever one death.

Samak was even sentenced to two years in jail for defamation, having accused another politician of accepting accepting bribes. The case was still going through the Appeal Court at the time of the 2007 elections.

Samak was hounded by the People’s Alliance for Democracy (พันธมิตรประชาชนเพื่อประชาธิปไตย). Originally a coalition of protesters against Thaksin’s government, PAD consists of middle and upper-class people from Bangkok and the South, supported by the conservative elite and factions of the Thai Army, some leaders of Democrat Party, and leaders of state-enterprise labour unions. They disbanded when Thaksin was ousted, declaring their aims achieved, but re-formed when Samak was elected. 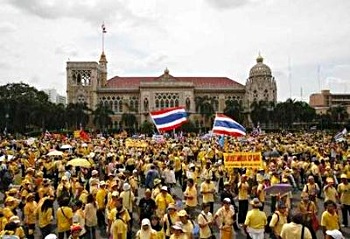 On 26 August 2008, PAD occupied the grounds of government buildings in Bangkok’s Old City in their tens of thousands, calling for Samak’s resignation.

Well-organised and well-funded, they barricaded themselves in with barbed wire, bamboo spikes and an impromptu electric fence, and were joined by their paramilitary force, the Srivichai Warriors. They resisted numerous police attempts to clear them away.

On 2 September, Samak declared a state of emergency. Army chief General Anupong Paochinda (อนุพงษ์ เผ่าจินดา), one of the leaders of the 2006 coup against Thaksin, declined to intervene, saying it was a civil matter.

The stalemate was resolved not on the streets of Bangkok but in the Constitutional Court.

On 9 September 2008, the Constitutional Court ruled that Samak’s paid TV gig was illegal moonlighting and ordered him to step down. He did. A short time later his appeal against his defamation sentence failed. 73-year-old Samak skipped bail and headed for the US, supposedly seeking treatment for his liver cancer.

Unsurprisingly, PAD sees him as a corrupt puppet.

Meanwhile, earlier in 2008, Thaksin and his wife Potjaman Shinawatra had returned to Bangkok to face their corruption charges. They were immediately arrested and charged, but released on bail. Potjaman was found guilty of illegal property dealings and sentenced to three years imprisonment, but released on bail pending appeal. Her adopted brother Bhanapot Damapong and her secretary were also found guilty. Thaksin himself awaited trial. However Thaksin and Potjaman were allowed to visit Beijing for the 2008 Olympic Games and did a runner, first to the UK, then east Asia.

Thaksin was tried in absentia, found guilty and sentenced to two years jail. He was last seen in Dubai, where he said he will not appeal the sentence and will make a statement on 14 December.

Which brings us to 7 October 2008… with both previous prime ministers Thaksin and Samak guilty of criminal offences, sentenced to jail and on the run.

PAD, who’d now been occupying government house grounds for weeks, gave new prime minister Somchai until 6pm to resign. A car bomb killed a middle-aged man — possibly the bomber himself. The ultimatum expired. The demonstration exploded into riot. The prime minister was evacuated through the back fence and helicoptered to safety.

In the subsequent teargas attacks and gunfire, there was another death and at least 381 injured. It was Bangkok’s worst violence in 16 years. Finally, tanks rolled onto the streets of the Old City to restore order.

In the weeks since then, it’s been further stalemate.

PAD has continued its occupation and their demands for Somchai’s resignation. They’ve threatened that their union members will cut electricity and water services, and their wealthier backers will lead a bank run to destabilise the economy — though neither has happened yet. Meanwhile, red-shirted pro-Thaksin forces have been mobilising in opposition.

Monday this week, PAD announced it was time for the final showdown.

Violence has escalated, including PAD’s protest moving to Bangkok’s old airport at Don Mueang (DMK) in the northern suburbs, where prime minister Somchai had moved his cabinet, and then the new Suvarnabhumi international airport (BKK), which has been closed since Wednesday.

Prime minister Somchai, returning to Thailand after the APEC meeting in Peru, has chosen to stay out of harm’s way in the northern regional city of Chiang Mai. 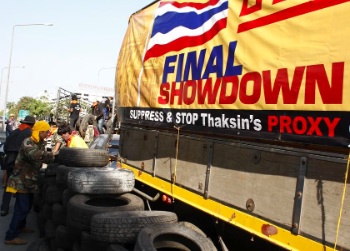 As I write this, it’s Saturday morning Bangkok time. PAD has said it’ll keep the airport closed until Somchai resigns. Police say PAD has 4000 permanently encamped at Suvarnabhumi, which PAD has barricaded with razor wire, and a further 2500 at Don Mueang — though their hyperconnected mob could quickly summon many, many more.

PAD is openly calling for a military coup, but General Anupong continues to say a coup won’t solve the country’s problems. “If the people are one, we are with the people. But, if the people are divided, there is no place for us,” he’s been quoted as saying. “The way out through taking control over the country by the military is a closed door and no more… No one should try to take this way.”

However Somchai has sacked his police chief, declared emergency rule, and authorised police to storm the airports and other occupied sites. Former prime minister Thaksin is believed to be pulling the strings from Dubai.

PAD has vowed a fight to the death.

Thank you. Any questions?