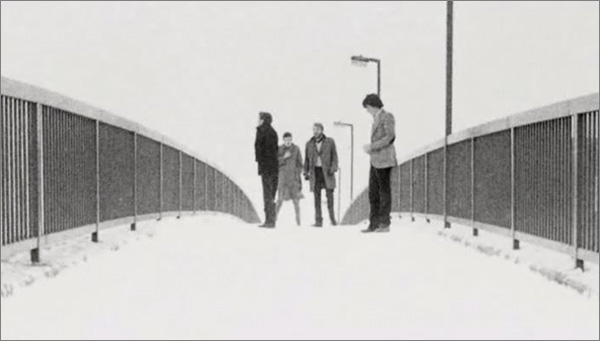 Yes. If you don’t already know, you’ll discover that Joy Division’s story is also the tale of Ian Curtis’ self-destruction.

Most people assumed Curtis was off his face during his erratic, mesmerising performances, but no! He was literally in a trance, which as the pressure of stardom climbed eventually became full grand mal epilepsy. Blaming himself for holding back the band’s meteoric rise, he killed himself in May 1980.

Joy Division is a powerful story. Yes, I shed a tear at one point. But it’s also a masterpiece, preserving a vital slice of musical history.

Joy Division opens today at the Chauvel Cinema in Sydney, Cinema Nova in Melbourne and the Luna Leederville in Perth.

[Photo: Joy Division photographed in Hulme, Manchester, 6 January 1979 by Kevin Cummins. Cummins appears in the film Joy Division and talks about the photo shoot when this was taken.]