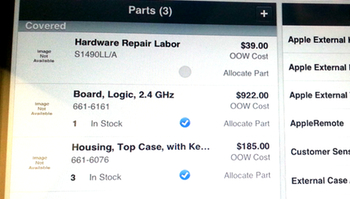 On Thursday, David at the Apple Store’s Genius Bar [ugh!] found that the MacBook Pro had essentially decided that electricity doesn’t exist. As his estimate (pictured above) shows, we’re looking at a repair bill over $1100.

Now rather than bite the bullet immediately, I thought I’d see whether more time in the rice might do the trick. I’m not hopeful, but there’s a chance it’ll save me money. I’m find out this afternoon.

My sincere thanks to @oberonsghost for the loan of an old MacBook for the duration, and @expectproblems for a similar offer with a MacBook Pro 17″ that I decided not to take up.

My sincere thanks also to Apple, for making backups easy with Time Machine, and me, for using them.

Not so sincere thanks to me for being honest. Damage done by liquids isn’t covered by the AppleCare warranty. I should’ve just said that the computer wasn’t powering up any more.