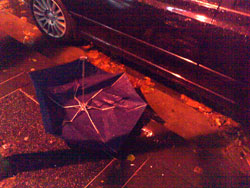 The worst storm in 40 years, someone said. An elderly couple dead after their car was washed off a bridge. A ship run aground.

Tattered umbrellas litter the streets like so many dead jellyfish. Like this one on Victoria Street, Potts Point last night, blood-red under the sodium lamps.

Stay at home, it may last a while, they’re telling us. Severe weather warning… flash flooding… hazardous winds… damaging surf… gale warning for coastal waters and closed waters. Yeah, I get the picture.

Right now there’s no real wind, though. There’s just the gentle sound of steady rain. And that always provides such a quiet, contemplative mood — even if it is only 13C outside. It’s perfect for cups of tea, re-stacking papers, reading… writing… apparently even relaxing is allowed on a long weekend.

Last night we all knew it was a bad storm, but we still went out. That’s amazing. Our trust in electric trains, the internal combustion engine and the electricity grid is such that mere Primal Nature in All Her Fury is no match.

Our salmon was perfectly grilled, the chilli sauce on our lamb was phenomenal. The wines, from both McLaren Vale and Victoria, were well-blended, subtle. Later, the performer was more than adequately entertaining. The front bar was rowdy but welcoming at the same time. There were smiles, laughter. And then a cheerful Pakistani lad drove me home in some sort of heated pod with chairs for a little over $20.

Outside, the stormed raged on. We were all but oblivious as our urban lives continued unabated.

3 Replies to “Quiet after the Storm”