Distinguished guests, ladies and gentlemen, it is my very great pleasure tonight to announce the recipient of the Inaugural Paul Neil Milne Johnstone Award for Language Mutilation. 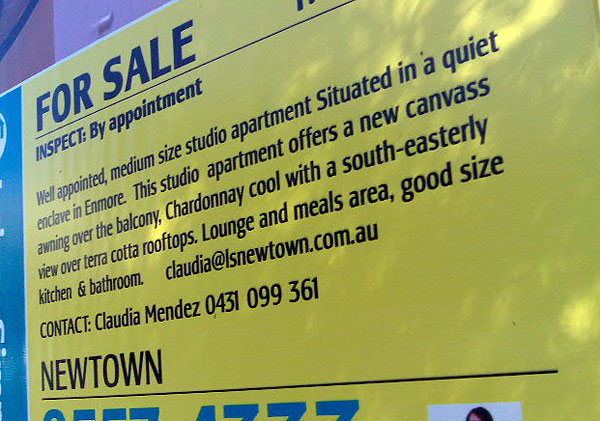 This award is named in honour of the late Paul Johnstone of Redbridge in England, who was cited by author Douglas Adams as writing the worst poetry in the entire universe. This award isn’t about poetry, however. It’s about Language. Language — and especially the abuse of language — in all its glory.

Of the many things which make us human, Language is one of the most important. Language binds our society together. Language, some even say, is what allows us to think rational thoughts.

So when people use Language badly, when Language is abused in order to mislead, to corrupt, to baffle or to sell a product, we shouldn’t ignore it. We should stand it on a pedestal, call up the author, point to them and say in a loud voice, “This person is destroying the very meaning of humanity.”

With this in mind, I’ve chosen as the recipient of the Inaugural Paul Neil Milne Johnstone Award a representative of a profession — if I may call it that — which is renown the world over for misleading language, namely, a real estate agent.

Ladies and gentlemen, would you please put your hands together for Claudia Mendez (pictured right), of Laing+Simmons, Newtown.

Now as Claudia is making her way to the stage, I’d like to say a few words about my choice, and take a look at her work…

Satirist John Clarke said almost everything that needs to be said about the language of real estate back in the 1970s. And I admit it’s hard to stand out in a field where a bed-sit has become a “studio apartment”, where something of “good size” means “not exactly tiny, and we make no comment about its condition or layout”. 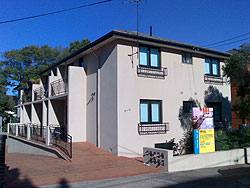 But Claudia’s work in promoting this flat in Harrington Street, Enmore (pictured left) is outstanding, and not just because she’s chosen the wrong spelling of “canvass”.

Claudia has turned a pedestrian view of inner-west rooftops into “a south-easterly view over terra cotta”. She evokes the serenity of a Tuscan village — cheerfully ignoring the fact that only some of the houses have tile roofs and that few of those would be the quite specific clay which constitutes “terracotta“.

Naturally, she neglects to mention that the south-west view is of the airport, and the bed-sit she’s selling — sorry, “studio apartment” — sits under the approach to the right-hand runway. She neglects to mention the milk and fish delivery trucks parked out front — the early-morning aural assault comes by land as well as sky. No Tuscan serenity here!

Claudia has also told us this apartment is in an “enclave”.

Now as any respectable dictionary will tell you, “enclave” means an area surrounded by some larger territory where the inhabitants are different culturally or ethnically, or where there’s increased security — like the Green Zone in Baghdad — an area somehow different in character from the surrounding area.

Here Claudia is working magic. “Enclave” sounds classy. It almost sounds like “exclusive”. Yet this block of six flats is pretty much like every other block of six flats in Sydney. Harrington Street is pretty much like every other residential street in Sydney’s inner west. But few people, even if they know the meaning of “enclave”, will remember to ask just exactly what is different about this block of flats.

But Claudia’s true genius — and this is what won her the award — is this magic phrase: “Chardonnay cool”.

At one level it’s meaningless. What’s “cool” about Chardonnay? Nothing!

Back in the 1980s when Australians first realised that wine came in varieties other than “red” and “white”, Chardonnay was the first white variety to gain a profile. And it’s still the most-grown grape in Australia, with some 30,000 hectares under cultivation. That’s why cashed-up bogans Kath & Kim drink Chardonnay, and why faded baby-boomer right-wing commentators still obsess over Chardonnay Socialists — it’s the only wine they know by name. In the 21st century, anyone who thinks Chardonnay is “cool” is a good 20 years behind the pace.

So you might think that using “Chardonnay cool” means Claudia Mendez knows sweet fuck all about wine.

As the boys at Freakonomics point out, when real estate agents avoid concrete descriptions of the home they’re selling, it’s usually of lower value. By telling us about “Chardonnay cool”, Claudia is sending a signal to more sophisticated buyers: “Beware, this property is a dog.”

Take a closer look at that sign. The only concrete, positive fact she mentions about this flat is that there’s a new canvas awning — which is what? $200 worth? Everything else is fluff and distortion.

But oh what fluff and distortion!

And so, distinguished guests, ladies and gentlemen, I ask you to put your hands together one more time for the recipient of the Inaugural Paul Neil Milne Johnstone Award, Claudia Mendez!