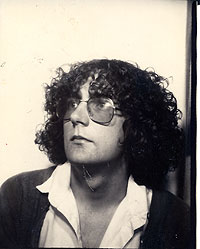 “Oh, no mate, I wasn’t Stilgherrian until after that was taken. For my student card, so that’d be… March, maybe February. Stilgherrian wasn’t until Winter Solstice…”

Daggy photo, eh? Am I scared or was I trying for cool and moody, somehow? Scared, I reckon. I was too nerdy to even know how to look moody, let alone actually achieve a significant level of floppy-haired angst. Now Stephen… now he pulls that off so well. But then he lives in Melbourne, it’s “of the place”.

Sydney doesn’t have the sandstone Victorian for a fully grey, Londonesque, Londonangstridden pout, 30% eye shadow and 70% the precisely-edited slow-motion curl of a designer black trench coat. Not with any genuine sense of ennui, anyway.

In the words of Ultravox:

Melbourne did the “faded grand city” thing a century ago. The richest city on the planet except London, thanks to a handy gold rush. But Imperial Glory fades when the cash runs out. After the high, the comedown must’ve been harsh.

Melbourne is self-confident, assured of its place in history. They hosted the Commonwealth Games knowing they’d hosted them before and they’ll host them again. They are not troubled by noisome fools.

Ah, Sydney is an amateur peroxide hooker at the end of a long, long night. The booze and pills have long since run out. The ashtrays are overflowing and soggy, the sun’s coming up and the dawn light reveals unpleasant things on the linoleum. Only some of which are clothed, and none of which know the names of any of the others, or how they got there.

Some poorly-repressed memory reminds me that shirt was pale yellow. Calling it “repressed lemon” won’t save it.

“I never had dress sense,” that’s a laugh! Of course I didn’t. In 1981 I was busily getting distinctions in Computing Science III, you can’t get nerdier.

But, nerdy or not, I became Stilgherrian. And committed myself to two and half decades of explaining “No, I don’t have a surname” and “Yes, that is unusual” and “Good heavens, two plus two does equal four, I’ve never thought of it that way before.”

Two and a half decades of people not being able to spell. 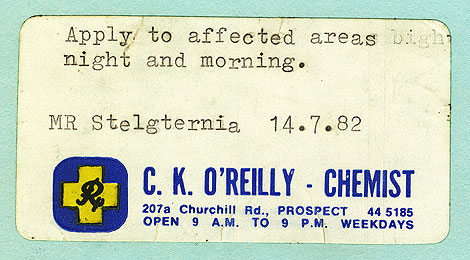