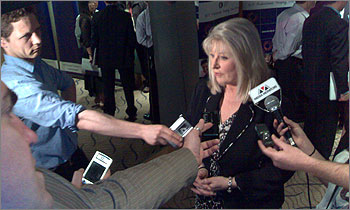 Body language is revealing. At Friday’s breakfast forum, two Senators’ body language showed their confidence in their grasp of Information and Communications Technology issues. Alas, the minister, Senator Helen Coonan (pictured), wasn’t one of them.

Allison was relaxed and comfortable, sitting back and waiting for her turn, ready to rattle on about quantum computing, laptops in school, IT literacy, and a global brand for Australian IT innovation — something like Woolmark for wool.

But Coonan frowned and ruffled through her papers as if cramming for an exam, nodding as she recognised something. I’ve been told since that she wouldn’t agree to the debate unless she had all the questions in advance — and her answers were apparently scripted.

Then came the lists. Lists of programs and reports and millions of dollars spent. The Coalition vision, it seems, is based on how much money its spent. Few specific achievement were named.

Conroy repeated Labor’s broadband promise: A Fibre to the Node network with a guaranteed minimum of 12Mb/sec to 98% of Australians. At $4.7B, “this is likely to be the single largest commitment of a Rudd government, we’re that serious about it,” he said.

Coonan tried attacking it, saying FTTN won’t help distant farmers, but came unstuck. She claimed that with her championed technology, the OPEL consortium’s WiMaX, “if you live under a rock you’ll be able to get broadband.” Own Goal #1, Senator: WiMaX can’t penetrate rock.

“You get into trouble when politicians start picking technologies,” Coonan said. “You mean like OPEL,” retorted Conroy. Own Goal #2.

And everyone’s threatening to break up Telstra. But as one journalist asked to resounding applause, “Has anyone got the balls to say you’re actually going to do it?”

[Note: This is an edited version of an article originally published in Crikey.]

5 Replies to “Coonan’s own goals in ICT debate”