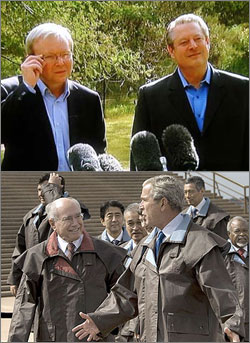 Al Gore’s Nobel Peace Prize is like a Magic Cloak of Invincibility. Now anyone wanting to criticise him had better have all of their ducks in a row — feathers freshly preened and all lined up like the North Korean Army — before they dare open their mouths.

And, through the magic of televisual political frottage, Kevin Rudd gets a +2 on his charisma too, since he’s been seen wandering Melbourne with The Big Al himself, quietly discussing… well, discussing something anyway. Does it matter exactly what?

Since the US of A is our best friend and protector, mentor and high-tech stuff salesman, these pairings of potential PM with an Important American define our future.

We have Kevin Rudd, the quiet and unassuming Supernerd who can crack jokes with the president of China in his own language. Next to Kevin we have Al Gore, who everyone knows through that movie.

OK, some people want to spoil the fun by pointing out a few errors, but hey we all got the message.

Al Gore hasn’t yet said whether he’ll run for President, but former president and Nobel Laureate Jimmy Carter is behind him.

And then we have the Man of Steel and his submissive relationship with the Lame Duck President, digging up coal and uranium and oil and gas and whatever else they can find and selling it as fast as they can. Dubya is on the nose politically and has been for months, and the Man of Steel is making up policy on the fly.