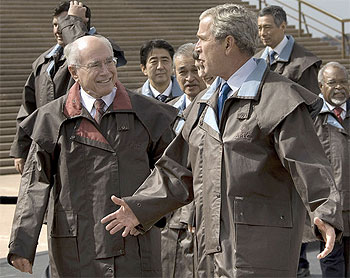 John Howard’s body language worries me. I want a leader, a statesmen to lead Australia, not a lapdog.

Some years ago, the ABC had vision of Howard greeting some visiting American dignitaries — I think Colin Powell was one of them. Anyway, as people got out of limos and approached each other the US visitors strode forward, calm and confident. Meanwhile Howard hunched down and cautiously extended his hand in a classic primate gesture of submission.

It was like a small-time shopkeeper receiving a visit from The Big City Bank Manager. It was embarrassing.

On the weekend, Howard was still behaving like a puppy-dog to George W Bush, as I think the photo (right) from the Sydney Morning Herald shows. OK, it’s only one frame, but I think it shows a nervous John Howard anxiously looking for approval from The Boss. What do you think?

But hey, have a look at the rest of the photos. At least Hyacinth is in her element. A shame Laura couldn’t make it, eh love?