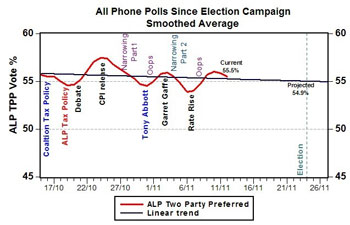 The Narrowing. The idea that during an election campaign voters return to the incumbent government. Supposedly the reality of an actual vote, as opposed to mere opinion polls, triggers voters’ fear of the unknown. As this graph shows, if there is a Narrowing, it’s bloody tiny this time around.

The Narrowing is nothing but mythology.

In the 2001 campaign, Kim Beazley started from behind and gained 5% before voting day — not enough to win, but enough to give him hope for next time. That’s a shift against the incumbent party, of course.

Of course that loose-mouthed thug Mark Latham went and screwed all that up. But this time we can see what the electorate really thinks of Howard now that they’ve got a credible alternative.

As the graph from Possums Pollytics shows, yes, you can sort of see a little sign of The Narrowing. But that gentle glidepath has to cross that line marked “50”.

Yes, the Coalition might be able to claw back enough support to win. As long as the election is on 28 July 2008.

I gather the election is sooner than that.

4 Replies to “The Narrowing, (not) by Dean Koontz”