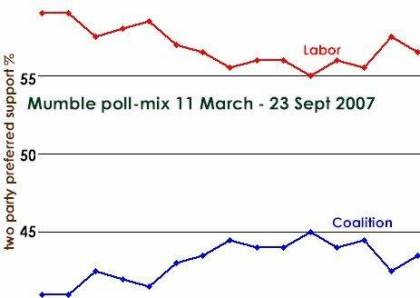 Earlier today I nearly choked. Despite Kevin Rudd making some minor tactical errors, despite squillions of our dollars being spent on government propaganda, Labor’s primary vote has reached its highest level since Kevin Rudd took over the leadership last year.

The graph (right) shows Peter Brent’s meta-analysis of all the major polls for the last six months. Clearly, all this talk of “a swing back to Howard” is crap. They’re just little wiggles in a much bigger picture that tells a very clear story.

There’s always a big gap in the middle of at least 10 percentage points.

Brent reckons the weighted aggregate 2PP vote is 56.5 to 43.5 in Labor’s favour. If so, Labor wins two-thirds of the seats in Parliament.

2 Replies to “A Picture of a Ruddslide”