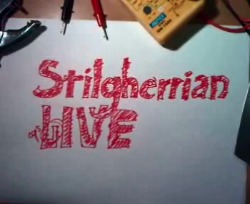 Yesterday I spent some time thinking about Stilgherrian Live, my “live on the Internet” program. Here’s what I’ve decided…

I’ll start another series of eight “regular” programs at 9.30pm (Sydney time) next Thursday 4 September. One-hour programs, like the “extended” episode 8 of Stilgherrian Live Alpha, with some new regular segments as well as “Cnut of the Week” and other “popular” elements.

Some of these segments will be pre-recorded, because I need some brief breaks during the program and it changes the pace nicely.

There’ll also be at least one interview per program — any suggestions for people you’d like to hear from?

There’s a few other changes too…

While I won’t detail everything just now, here’s few snippets to whet your appetite:

Some people have compared what I’m doing with Rove Live or The Colbert Report. That’s delightfully flattering, thank you. While I’m not (yet) as polished as those consummate performers, there is one important point there: the “program format”.

A program’s format is its pre-arranged sequence and structure of elements. It makes it easier to produce because you already know that you’re writing a 2-minute to-camera rant, say, and the audience knows what to expect next — or is surprised when you break the rules.

What interests me is how this new medium, the Internet, can reach a smaller, more focussed audience and how that changes the format. Both Rove Live and The Colbert Report are “broadcast TV showbiz” style. Big, loud, colourful. What I’m doing is more intimate, with the camera much closer to my face if nothing else. That makes it a lot more like radio.

Apart from the regular Thursday night programs, I may do occasional live feeds at other times. Indeed, if the plans for mobile connectivity come together, that may combine with the Internet’s ability to tell people that you’re going live now to create a more time-flexible operation all round. More on that soon.