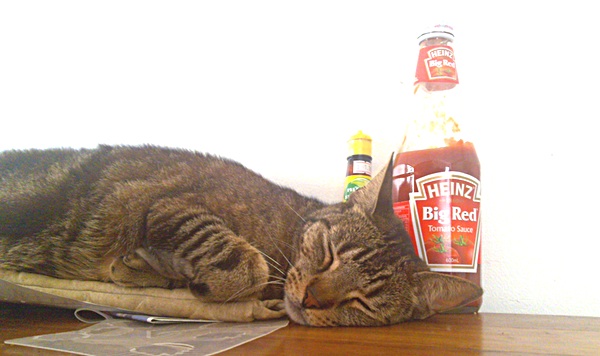 I’ve avoided saying this, because there was enough to cope with last month and I was indulging in wishful thinking. But the time has come to say it. Apollo has disappeared. I don’t think he’ll be seen again. Good luck, my feline friend.

When I bumped out of the Enmore house and just before I left for a trip to the US, I took Apollo to stay with Googler Anthony Baxter. Alas, on his first night there, Apollo found a way to escape — no doubt spooked by the strange environment including three other cats. He hasn’t been seen since. The Baxter residence was far enough from the Enmore house to be well outside his territory, so I don’t think he’ll have found his way to familiar ground. If he had done, we’d have heard by now.

Given that Artemis’ life ended only a month beforehand, I was suppressing the emotions of this second loss. No longer. It seems appropriate to be writing this at Tea Tree Cottage while a night-time thunderstorm rages outside, the rain sweeping through the scrub.