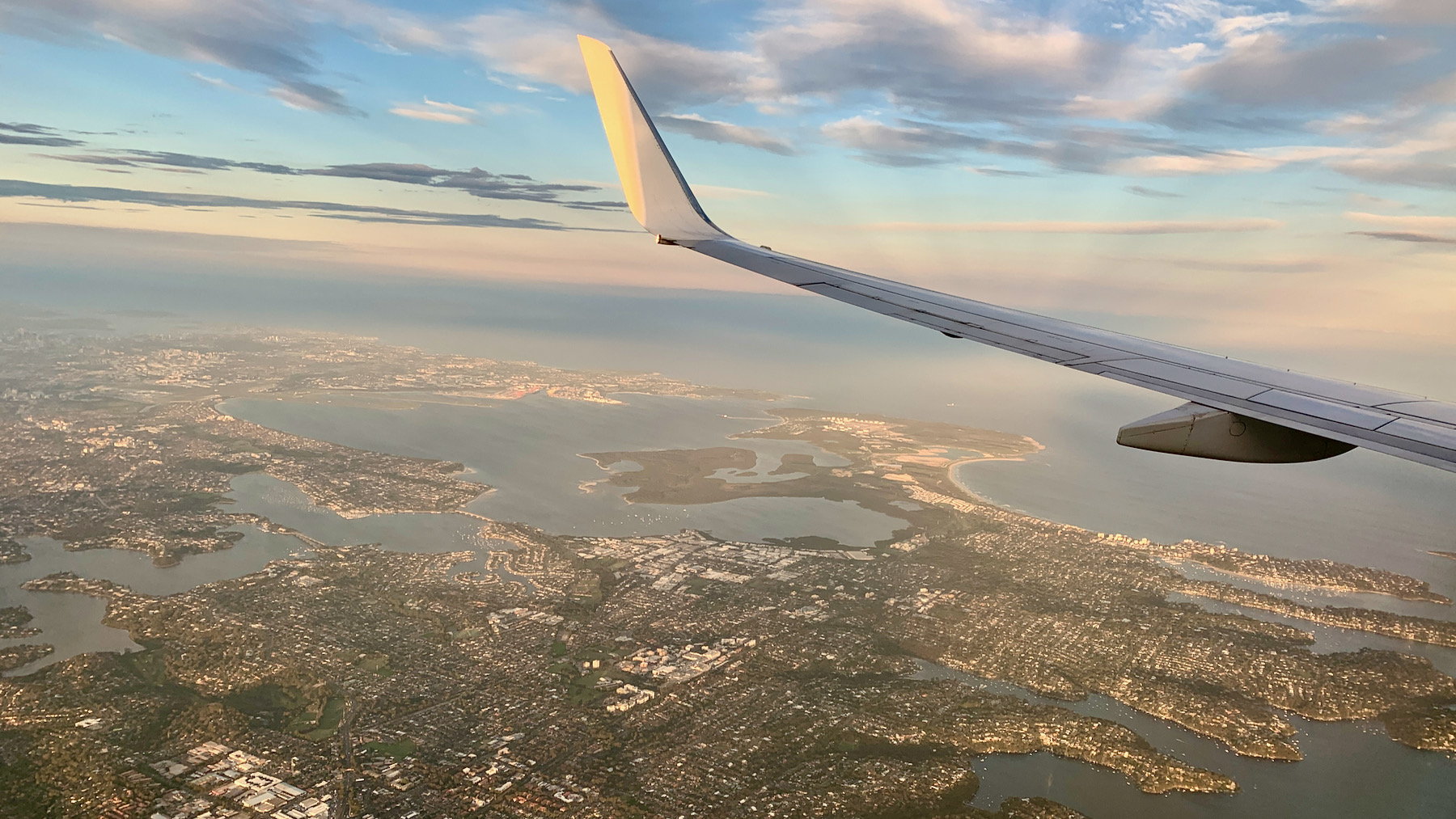 It’s a year since my last airline flight, returning to Sydney from a conference in Melbourne. What a year it’s been since then! My week of Monday 22 to Sunday 28 February also saw me get a few things written, but you can’t see them today.

END_OF_DOCUMENT_TOKEN_TO_BE_REPLACED

The highlight of my week of Monday 24 to Sunday 30 September 2018 was obviously being flown from Sydney to (nearly) Adelaide by Mark Newton in his Van’s RV-6 VH-SOL. That’s it in the photo. Obviously.

A podcast will result from that trip, “The 9pm Sierra Oscar Lima (Or Llama)”, in about four weeks from now, once I’ve finished travelling. Meanwhile, you can read the tweets and look at the blurry photos.

A second highlight was running a successful Pozible crowdfunding campaign, The 9pm Flying Visits, to record some podcast segments in Adelaide, Washington DC, and Melbourne. I’m visiting those cities for work, but thanks to 50 generous supporters contributed $2138 to cover extra accommodation and the like. See below for how that will all work.

None published, but I’ve recorded a long conversation with Nicholas Fryer, who does The Arch Window segments in The 9pm Edict. That will appear some time in the coming week.

As I post this on Sunday afternoon, I’m at Adelaide Airport for flights via Melbourne and Abu Dhabi to Washington DC. I’ll arrive there on Monday evening local time.

I’m spending the week in DC covering the FireEye Cyber Defense Summit from Tuesday to Thursday, then enjoying my first visit to the city and recording more podcasts bits. I’m very pleased that one of those bits will be an interview with the remarkable Mike Godwin, creator of Godwin’s Law amongst many other things.

On Sunday night I fly out via Abu Dhabi to Melbourne.

The following week I’m in Melbourne, arriving on Tuesday evening local time to cover the Australian Cyber Conference, formerly the Australian Information Security Association (AISA) National Conference, on 9–11 October. I’m staying in Melbourne to write, and record yet more podcast bits, before flying up to Sydney on Sunday night.

[Photo: Refuelling at Swan Hill. Mark Newton’s Van’s RV-6 VH-SOL about to be refuelled at Swan Hill Aerodrome, as the signage described it, on 28 September 2018.]

Do we really think we can just bolt some sort of “government 2.0 module” onto steam-era bureaucracies and magically bring them into the 21st Century?

Sure, our governments served us fairly well in the 20th Century, at least in the West. They beat the bad guys in WWII, brought us through the scary Cold War and delivered health and prosperity our grandparents would have found unimaginable.

Not to mention Windows ME.

But times are changing. We’re starting to notice that things don’t work as well as they used to. We’re spending taxpayers’ money bailing out economies only to have bankers suck out more bonuses anyway. Conferences intended to agree on Climate Change action produce… well… nothing concrete. Sydney’s suburban railway network is slower than in the 1920s!

Having invested so much time and money on these institutions, though, we’re reluctant to let them go.

This is the sunk cost fallacy.

Concorde is the classic example. Long after it must have been clear to the French and British governments that no-one was going to buy this aircraft, they continued investing in it simply because they’d already spent so much and didn’t want to lose those “sunk costs”. Yet those costs were gone, no matter what. To continue spending was irrational.

The same happened in the Vietnam War, where US President Lyndon Johnson kept committing thousands of troops after he’d realised the cause was hopeless and America could not win.

I’ve written before, in Risk, Fear and Paranoia: Perspective, People!, that change is being held back by, well, fear and paranoia. But this morning I stumbled across Umair Haque’s The Builders’ Manifesto. He’s got it in one.

END_OF_DOCUMENT_TOKEN_TO_BE_REPLACED

Thank you, Virgin Blue, for sending your “erroneous” email Friday night. You’ve done us a great public service. You’ve exposed a pack of greedy, selfish, shallow tools who deserve to be ridiculed publicly. Thank you.

On Friday evening, Australian airline Virgin Blue sent an email telling some Velocity Rewards members they’d been upgraded to Gold status. But as documented at mUmBRELLA, the email went not just to those entitled to the upgrade but their entire database — including people who’d opted out of email marketing.

Including me because, yes, I’m a Velocity Rewards member.

“That can’t be right,” I thought. “I haven’t flown with Virgin Blue this year.” Then I saw others saying similar things online and I figured the mistake was more widespread. I chuckled, knowing that someone had a bit of a mess to clear up.

Oops! Due to an error you’ve received our previous email by mistake. Please disregard the free upgrade communication as unfortunately you do not qualify for that upgrade.

We apologise for any inconvenience caused.

Mistake. Correction. Apology. That’s the end of the story, yes? Alas no.

Suddenly a whole bunch of people are demanding their Gold status should stay even though, like, they’re not actually entitled to it. People are “upset”. They’re demanding compensation, some even saying they should be compensated with a free flight voucher.

Compensated? Compensated for fucking what, exactly?

Compensated for being too stupid to realise the email was obviously a mistake? Compensated for having a vastly over-inflated sense of entitlement? Compensated for being so much of a consumer-puppet that you validate yourself by bragging about some confected faux-status symbolised by which colour plastic card sits in your wallet and then being embarrassed because, oh sorry, you’re actually still just another cheap-arsed prole after all?

Now of course there’s a metric bazillion blog posts and comments banging on about how this is “epic fail” on Virgin Blue’s part and how they’d have handled it so much better and faster. I won’t link to them because it’s too depressing to realise how many instant fucking experts appear after every little glitch is made public.

However I will link to Darryl King’s excellent piece about what he calls Crowd Spanking.

Why is it that the tools of Social Media make tools out of people?

Yes, companies, people and organisations of any sort can and should be open to criticism and correction of poor behaviour. I agree totally. However I don’t agree that Crowd Spanking of everyone that does something wrong is effective nor necessary …

Add some perspective. This is not a corporation that has exposed their staff and customer to asbestos and are denying compensation. It is an upgrade people! …

Before all the Social Media Gurus come up with the 10 things that Virgin Blue could have done better blog posts think through how businesses and people at work live.

“Epic fail” on Virgin Blue’s part? Bah! Step back a little and think about the full gamut of things which an airline can get wrong and the potential consequences. Up one end, you’ve got mistakes where hundreds of people die in a ball of flame, traumatising their loved ones. Down the other end you’ve got… gosh! A marketing email that was sent to people by mistake.

To the folks who reckon they’d have handled it better and quicker, well, are you really set up to handle such an unusual situation on a Friday night when people have gone to the pub or gone home for the weekend? Personally, I reckon identifying the problem and getting the second email out in three hours isn’t a bad effort — especially when in the meantime there’s, you know, a fucking airline to run!

I reckon — and this is just my opinion here — but I reckon we save the Really Big Stick for mistakes which actually matter. Also, stop being such selfish, judgemental little pricks.

[Update 16 October 2009: To illustrate some points I’ll be making in the comments, here’s a screenshot of the erroneous Velocity Rewards email.]

END_OF_DOCUMENT_TOKEN_TO_BE_REPLACED A milestone in aviation history this week. The Gimli Glider (pictured) made its final flight on Thursday 24 January.

I mentioned this amazing story a few months back. In brief, in 1983 an Air Canada Boeing 767 ran out of fuel at 28,000 feet over Ottawa and the pilots glided it safely to the ground — landing at an old airport which, unbeknownst to the pilot, was not a motor racing circuit. A very, very fine piece of flying indeed.

The aircraft was returned to normal service — there’s nothing a bit of panel-beating can’t fix! — and for the last 24 years has had a normal career.

Hat-tip (and the full story) thanks to Telstar Logistics.