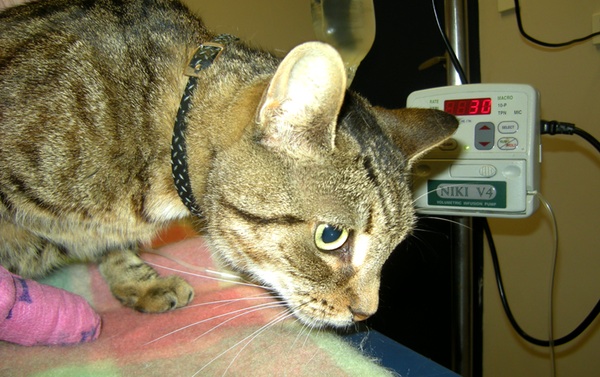 There are less-invasive surgical techniques, which I’ll perhaps-inaccurately call “keyhole surgery”, that could remove that kidney stone. The operation would have to be done by the University of Sydney’s surgeons. The cost would be in the order of $3000. If in their pre-surgery investigations they decide that full surgery would be required instead, that’d be more like $4000 to $5000.

If we did some pre-surgery investigations — and the Uni has better imaging equipment and more experienced operators — that would probably cost under $1000, and would count towards any subsequent surgery costs.

There is no guarantee that surgery would succeed, of course. It may well be that both kidneys have been damaged beyond repair. That wouldn’t be known until the surgery had been done, the stone removed, and this process of determining kidney health done all over again.

Even with successful surgery, Artemis might well require a kidney transplant — and apart from the massive cost would they even recommend it in these circumstances? — or permanent dialysis-like fluid support, or more. And don’t forget that we haven’t even considered those lesions in her mouth — although my gut feeling is that with all this talk of kidney problems it’s less likely to be the dreaded mouth cancer.

Donations so far total around $3500. In other words, they cover the costs so far, plus any pre-surgery investigations. They would not cover any surgery itself, nor any subsequent costs.

I’ve told Pet Vets that I’d discuss Artemis’ condition with you all overnight, and that I’d be in touch tomorrow with our decision on how to proceed. So how should we proceed?

Before you answer that, do remember that not all stories have a happy ending. Remember the sunk cost fallacy. And have you seen the news? There are bigger stories unfolding this week. I should also flag that some donations were from friends who insisted I should also take care of myself, given my need to move house.

So… what say you all?

I will be here to moderate comments and answer questions through the evening and until I decide I’ve run out of energy.