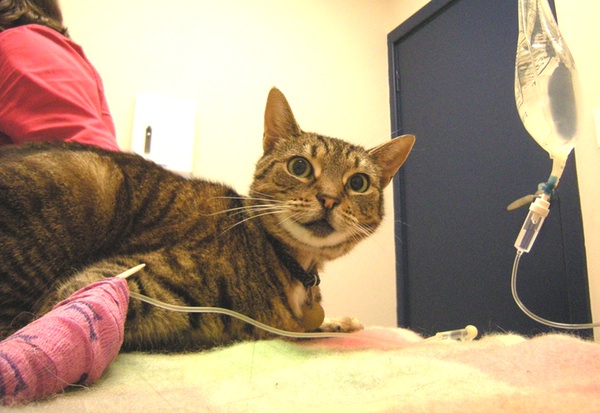 Dr Gibbs, as well as the other vets at Pet Vets these past few days, have all stressed that the range of possible outcomes at this point covers the entire gamut. At one end is complete recovery, perhaps because this acute kidney failure was caused by some random toxin and there’s no or little permanent kidney damage. At the other end is severe kidney damage that will never be manageable. In between are various scenarios and various techniques for managing less-than-perfect kidney function. As I say, it will take some time yet to discover where we sit on that spectrum.

And on top of that, if you’ve been following this story you’ll know that there’s still the problem of those lesions in Artemis’ mouth. Cancer? Mere side effect of this kidney problem? We simply don’t know at this stage. Taking a biopsy requires Artemis being able to process the anaesthetic that’d be needed. She’s not there yet. Should we do ultrasound to look for other signs, other potential causes? Well, none of that would change what we’re doing right now, so let’s not waste time and money doing random procedures.

Meanwhile, I continue to appreciate everyone’s support. Thank you so much for your messages and your donations — which have now exceeded $3000. And Dr Gibbs was astounded last night to be asked at a social function, when she said she worked at Pet Vets, “Oh, are you taking care of a cat called Artemis at the moment? How is she?”

Apart from that, I will only post when there is specific news. Alas, I do have to focus on everything else in my life, such as the Patch Monday podcast production later today and… oh… yes… preparing for the househunting.

3 Replies to “Artemis improves, but it’s early days yet”