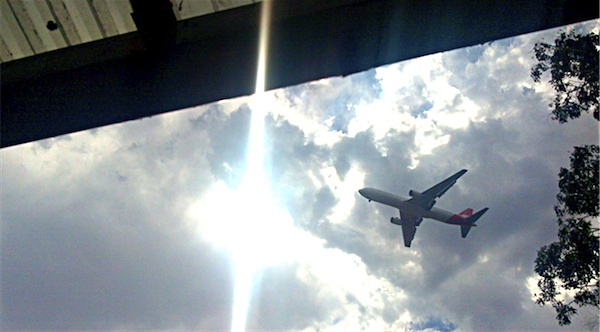 Sydney Airport has responded to my email about interference with our Wi-Fi and Next G reception. In standard corporate style, they begin by reminding me that “aviation safety — both in the air and on the ground — is paramount”. It gives some useful information — but passes the buck firmly to Airservices Australia.

The full text is over the jump.

Yes, the email arrived a day later than their 3-day stated turnaround time, but that’s OK considering I did say this would all be published.

Airservices Australia runs stuff like air traffic control so, yes, this does perhaps belong in their court. As they’ve been suffering some problems themselves, it’ll be interesting to see their response.

Thank you for your recent email concerning the electronic interference caused by air navigation equipment at (and in the vicinity of) Sydney Airport.

Aviation safety — both in the air and on the ground — is paramount. The Australian Government agency responsible for providing safe air traffic control management, telecommunications and navigation services to the aviation industry is Airservices Australia. Airservices Australia therefore operates a number of radio navigation aids that provide guidance to aircraft operating in and out of Sydney Airport, particularly in poor weather conditions. It also operates a number of surveillance systems for aircraft in the air around Sydney Airport (and beyond). More specifically, its website indicates that the following systems are provided:

As you point out, aircraft themselves also carry on-board sophisticated navigation and other equipment.

As to the impact these systems have on electronic equipment located outside the airport, given the above, I would recommend you contact Airservices Australia. They would have experts available who should be able to provide you with more precise information concerning why a particular piece of air navigation or related equipment may be interfering with other ground-based equipment at certain frequencies. To contact the Noise Enquiry Service, please phone 1800 802 584 (freecall) or 1300 302 240 (local call).

You have also mentioned the work being undertaken on Sydney Airport’s cross (east-west) runway. This relates to the Runway Safety Enhancement Project. As you correctly point out, the work needs to be done – this is because it is necessary to comply with Australian and international aviation safety requirements.

Further information concerning this project can be found at: http://www.sydneyairport.com.au/SACL/Corporate+Information/Runway+Safety/default.htm. As you have noticed (living in Enmore), the restrictions on the operation of the east-west runway while construction is underway has temporarily changed the distribution of aircraft noise around the airport. The main impact on use of the east-west runway occurs during the first phase of the project, which is due to be completed by mid-June 2009 (having commenced in mid-October 2008).

Information published by Airservices Australia shows that the proportion of aircraft movements to the north of Sydney Airport during November 2008 (the most recent data available) was 31.9%. This is actually less than in November 2007 when movements to the north of Sydney Airport accounted for 34.01% of all movements. It should also be noted that not all of those aircraft movements would have been directly over Enmore. This is because Enmore is less affected by aircraft departing from the main north-south runway than it is by aircraft approaching the north-south runway (aircraft departing from that runway turn to the north-west soon after take-off as they track towards Richmond or Katoomba). Airservices Australia should be making the December 2008 data available in the next few weeks.

Sydney Airport apologises to people who will be affected by this vital runway safety project, but it is essential that we comply with the Australian Government’s air safety regulations.

The fine-grained statistics on which aircraft flew where will depend, of course, on the weather. The weather in December 2008 was very different from 2007. As, for that matter, was the health of commercial passenger aviation.

At least Sydney Airport apologises for the noise and interference — but I don’t see any offer of that make-good slab of beer, or a tour of the new facilities when it’s finished. That’s a shame.