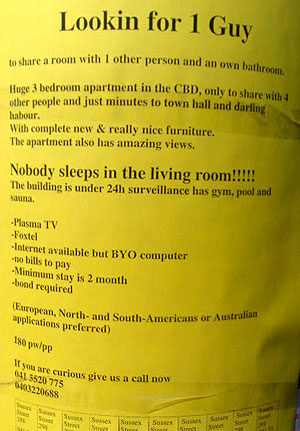 This poster advertising share accommodation in Sydney is pretty typical of the genre — a list of features, tear-off tags with phone numbers, and the notice that you’d be the fifth person in a 3-bedroom apartment.

But there are two features worth pointing out.

1. Boasting that “Nobody sleeps in the living room!!!!!” reminds us that it’s now normal to over-crowd CBD apartments. These buildings were designed with a certain occupancy, so may the gods help them all in the event of a fire.

2. Saying “Europeans, North- and South Americans or Australian applications preferred” is just a coward’s way of saying “No blacks or Asians” — which is a bit rich for someone choosing to live in Sussex Street, right next to Sydney’s Chinatown.

If it wasn’t for the fact that doing so might count as harassment, I’d suggest that we all phone you and say so.

16 Replies to “Owns plasma TV, but still a racist”