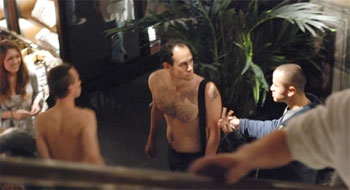 You’d think that Abercrombie and Fitch, who use imagery of the shirtless male throughout their marketing, would appreciate a few more shirtless men, right? Apparently not.

New York-based Improv Everywhere, who cause “scenes of chaos and joy in public places”, placed 115 shirtless men in A&F’s store on 5th Avenue.

After about 15 minutes… security employees started approaching all of our men and asking them to either put a shirt on or leave. They informed us that the model was a paid employee and his state of undress didn’t justify ours. So despite the fact that the store constantly bombards you with the image of the shirtless male, Abercrombie still maintains a “No Shirts; No Service” policy. Some agents protested that they were trying to buy a shirt, but the staff countered with the not-so-logical, “If you put on a shirt then you can buy a shirt”…

Two agents were actually stopped while in the process of checking out! They were waiting in line for 10 minutes to buy some $45 shirts, only to be grabbed at the register. One of them was in the process of handing over his credit card as he was nabbed and informed he wasn’t allowed to make a purchase!

There’s plenty of photos and videos, some of which are quite, erm, scenic if you’re so inclined.