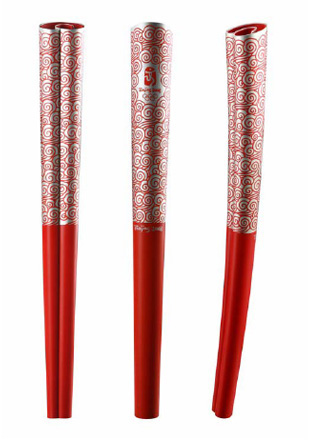 Given my comments on the Torch of the 2006 Commonwealth Games, which was later revealed to be little more than an elaborate USB data key, I supposed I should say a few words about the recently-announced design of the torch for the 2008 Olympic Games to be held in Beijing (pictured left).

Which is more than I can say for the slogan “Light the Passion Share the Dream” — but then such slogans tend to be collections of relatively meaningless nice-sounding words that couldn’t possibly offend anyone.

But back to the torch…

Fortunately, despite being designed by computer company Lenovo, there don’t seem to be any lame technowank features like built-in webcams. However the propane burner only has enough fuel for 15 minutes in good wind conditions — which means there’ll be a lot of these torches lighting each other and being passed along.

“The Torch incorporates technological innovations to be able to remain lit in winds of up to 65 kilometres-an-hour and lit in rain of up to 50 millimetres-an-hour,” says another media release. “Other technological advancements prevent colour discolouration and corrosion around the cone from which the Flame burns. The Torch construction is also environmentally-conscious. The materials are recyclable…”

… though I can’t see too many of these sought-after souvenirs being melted down for scrap!

So, folks, what do you think?