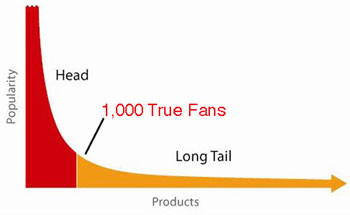 “A creator, such as an artist, musician, photographer, craftsperson, performer, animator, designer, videomaker, or author — in other words, anyone producing works of art — needs to acquire only 1,000 True Fans to make a living.”

It’s worth reading the full essay to completely grok what he’s on about. But in brief, a “true fan” is someone who’ll purchase anything and everything you produce.

They will drive 200 miles to see you sing. They will buy the super deluxe re-issued hi-res box set of your stuff even though they have the low-res version. They have a Google Alert set for your name. They bookmark the eBay page where your out-of-print editions show up. They come to your openings. They have you sign their copies. They buy the t-shirt, and the mug, and the hat. They can’t wait till you issue your next work. They are true fans…

Kelly’s point is that the Internet allows you to find and stay in touch with True Fans cheaply and easily — globally. He gives some useful numbers to help think it through, and points to some examples which are already working.

The trick is making direct contact with the fans out there in the long tail, converting a thousand Lesser Fans into a thousand True Fans.

Assume conservatively that your True Fans will each spend one day’s wages per year in support of what you do. That “one-day-wage” is an average, because of course your truest fans will spend a lot more than that. Let’s peg that per diem each True Fan spends at $100 per year. If you have 1,000 fans that sums up to $100,000 per year, which minus some modest expenses, is a living for most folks.

One thousand is a feasible number. You could count to 1,000. If you added one fan a day, it would take only three years. True Fanship is doable. Pleasing a True Fan is pleasurable, and invigorating… 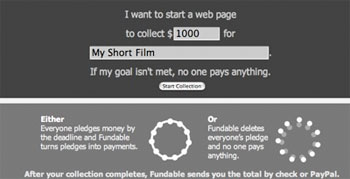 Kelly has researched the history of this, too. He’s discovered a First Monday essay from 1999 where John Kelsey and Bruce Schneier call it the Street Performer Protocol. And in 2004 author Lawrence Watt-Evans used this model to publish a novel — adding a chapter a month through fan subscriptions. There’s plenty more examples.

He also points to Fundable, a web-based organisation which…

…allows anyone to raise a fixed amount of money for a project, while reassuring the backers the project will happen. Fundable withholds the money until the full amount is collected. They return the money if the minimum is not reached.

Kelly reckons that an artist shouldn’t find it too hard to nurture 1000 True Fans globally. It certainly beats poverty. And it’s certainly made an impact upon my thinking! [full essay]