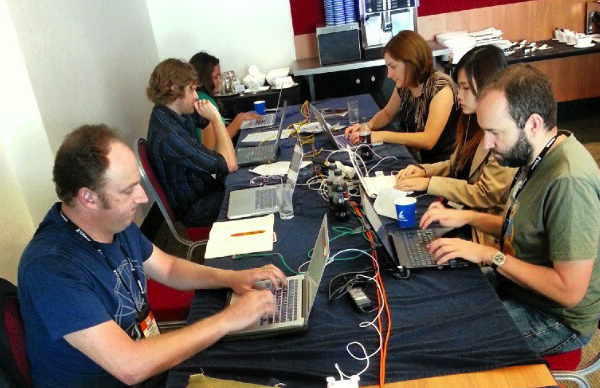 But if you want to cut to the chase, here’s what I think are my five most contentious tweets, the probable cause of any difficulties.

All of those comments were on-record then, and I’m perfectly happy to put them on-record again now.

To give you a taste of Silva’s presentation style, here’s his video To Understand is to Perceive Patterns.

TO UNDERSTAND IS TO PERCEIVE PATTERNS from Jason Silva on Vimeo.

I’ve never met Silva face to face, or even spoken with him that I recall. I had, and still have, zero interest in doing so.

I did see him a couple weeks later, though, at the opening night party of the Sydney Opera House’s Festival of Dangerous Ideas — we were both on the program — but it was at a distance. He was holding court with a group of fans who gobbled up his disjointed crap. I left them to it.

But the morning after the TechEd keynotes…

The following morning, immediately before a scheduled press briefing, a Microsoft staffer pulled me aside for a little chat. I wish I’d taken notes, or perhaps even recorded the conversation, but I didn’t. My bad. So this is just my memory.

Concerns had been raised, he said, about my tweets. I think the word “tone” was used. He didn’t say who had raised these concerns, and I don’t think he ever gave a concrete description of these concerns. I remember being confused.

Surely there was no suggestion that Microsoft wanted to exert some sort of control over what I said on Twitter? Oh no, of course not, he reassured me. Well good. But I’m still a bit confused, I said. I’m not quite sure what you want to happen next.

“We just wanted you to be aware that these concerns have been raised,” he said.

“Oh, well thank you for telling me then,” I said, and there the conversation ended.

That night, he and I spoke over beers, as is the fashion at these corporate events, and that’s where I assumed the matter had ended.

Reflections on those tweets

Yes, “punch him in the face very, very hard” and “you should not hand me a gun today” are violent references. Der. But they’re also statements about my state of mind, not threats. Nor are they inciting others to acts of violence.

Even the most cursory glance through my Twitterstream over the last six years would soon reveal to any intelligent, language-aware reader that this is all, as I said, part of my shtick. I used the word “punch” ten times that month, for instance, although one of them was about “punch cards”.

“If someone starts talking to you like a pirate, it means that they want you to punch them in the face,” was one real example.

Stabbing was popular too, in tweets such as: “Phrases that should be grounds for stabbing PR folks: ‘accelerate your path to X.’ Only morons actually speak like this.”

Heck, I regularly call for people to punched, stabbed, shot, drowned, impaled on spikes, disembowelled in front of their own children or otherwise mistreated. I do believe that on more than one occasion I’ve called for George Street, Sydney, to be doused in nerve gas. And only last night I noted that genocide has a bad rep, sure, but you shouldn’t let that “history” cloud your judgement.

Just how thick would you have to be to take any of that seriously?

I produced two articles and a podcast:

I also made the following observation in that week’s Weekly Wrap:

Again, regular readers will know that my frustration with these bullshit rituals is a long-running thread in my writing. I’ve always thought that intelligent, well-educated communications professionals would notice when they’re parroting meaningless buzzwords. I thought that understanding and writing for your audience, rather than dribbling out a few clichés, was the very basis of the craft?

So what happens now?

For my part, now that I’ve disclosed Microsoft’s ban, and told you that I think it’s hilarious, we can all take that on board when interpreting my work. It’s not like I’m going to stop writing about Microsoft or doing my best to present factual reportage, fair analysis and my genuinely-held opinion.

As for Microsoft, well, I think if there’s a problem then they need to talk to me about it, and maybe we can figure something out. That’s Conflict Resolution 101. It’d also be kinda nice if it were expressed in concrete terms, not mealy-mouthed passive-voiced evasiveness.

But, Dear Microsoft, if we’re talking about allegations of conduct that you reckon prevents me from attending your events and doing my job, well, that’ll have to come to me in writing, on letterhead, and with a specific individual’s name and signature at the bottom. And if you can’t do that, then surely the only logical alternative remaining is to provide me with a written apology?

For bonus points, Microsoft, you might like to have someone tell me what’s really going down here, because to be honest this smells to me like some mongrel species of bullshit corporate politics and scapegoating. If the problem is really something else, and my tweets during Silva’s keynote are just a cover, then I’m happy to have an initially off-record conversation to help clear the air.

For triple bonus points, send me Jason Silva’s head on a spike.

34 Replies to “Microsoft has banned me from covering TechEd”