On Wednesday I decided to see if I could finally sort out my Google+ profile, which was suspended around two and a half years ago. I didn’t really get anywhere, but I did discover some new and different frustrations.

First, the back story…

As the first screenshot (above) says, “Your profile [that is, my profile] was suspected because it violates our names policy.” That’s because back in 2011, Google required that names consist of at least two words. To get something that looked close to my single-word name (a “mononym”), I’d entered it as “Stilgherrian .” But the full stop (“period” for American readers) isn’t allowed, and the profile was suspended.

I was so frustrated by that, and even more so by Google’s arrogant-seeming error messages, that I wrote an infamous expletive-filled blog post — which got more than 100,000 unique viewers on the first day. Even now, two and a half years later, it sometimes gets a couple hundred readers a month.

Since then, Google had supposedly started allowing people to display their “nicknames” (that is, pseudonyms”), at least in some contexts, so I figured that I’d give it another go. It wouldn’t worry me too much if I was “Stilgherrian Stilgherrian” under the hood, as long as my name was displayed properly.

So I clicked on “Take action”… 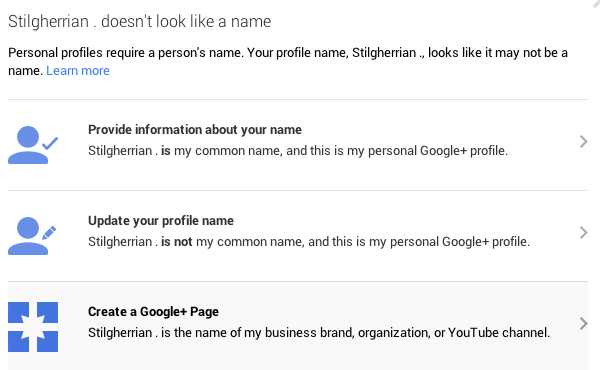 Personal profiles require a person’s name. Your profile name, Stilgherrian ., looks like it may not be a name. Learn more

And it seems that I have three options.

Provide information about your name
Stilgherrian . is my common name, and this is my personal Google+ profile.

No, my name doesn’t have a dot in it. I suppose I could provide the documentation and explain that their system doesn’t let me enter my name properly. But what else is on offer?

Update your profile name
Stilgherrian . is not my common name, and this is my personal Google+ profile.

This presumably would allow me to try entering the name again. It seems to logical thing to try.

Create a Google+ Page
Stilgherrian . is the name of my business brand, organization, or YouTube channel.

Now I know that a “page”, rather than a “profile”, would allow a single-word name. But I’ve tried very hard over the years to make it clear that my name is not a pseudonym, and creating a page creates exactly that unwanted impression. I might be forced to do it this way, however.

Well, the middle option is the “correct” one. I clicked on it, entered “Stilgherrian” in all of the name fields — and then hit another problem. 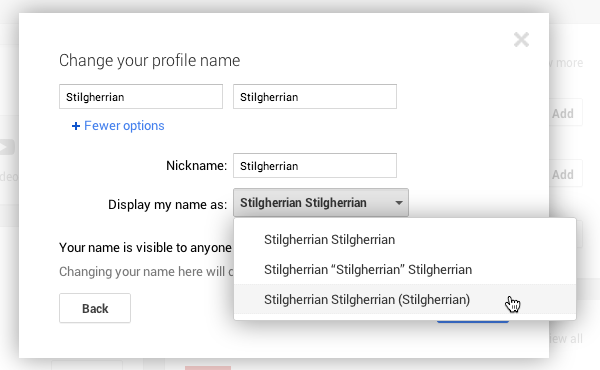 I’m being given just three choice for how my name will then be displayed, none of which are correct:

As is says, “Changing your name here will change it in all Google products”. See? Great. 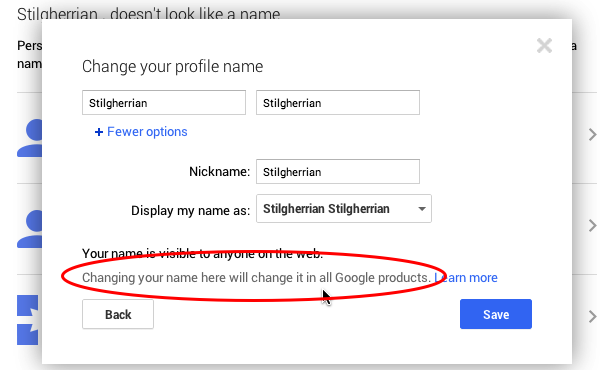 Now I was tempted to see what might happen if I submitted it anyway, and then followed it up with an email asking someone to fix it manually. But the final screen before submission turned me off that idea. 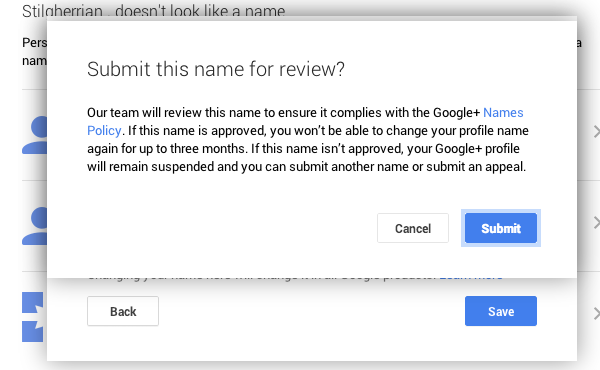 Submit this name for review?
Our team will review this name to ensure it complies with the Google+ Names Policy. If this name is approved, you won’t be able to change your profile name again for up to three months. If this name isn’t approved, your Google+ profile will remain suspended and you can submit another name or submit an appeal.

With no indication of how long the review would take, and with deadlines for real work looming, I decided to leave it for another day.

I’ll probably end up working through Google’s media people, because the lack of a working Google+ profile is hindering some specific parts of my media work. I’ll talk about them another day. But with more than 13,000 people in Australia with mononyms, it really shouldn’t be this hard. Stay tuned.

4 Replies to “Adventures in Identity: Still struggling with Google+”