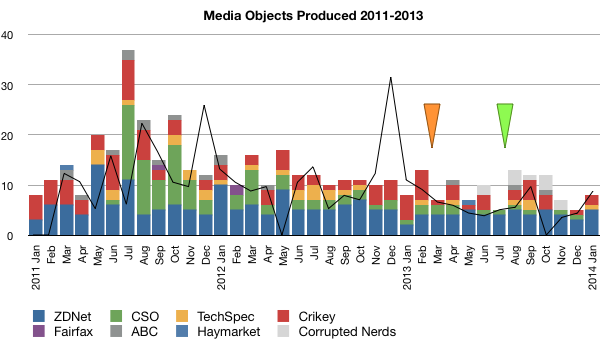 Things were good back in 2011. In the first part of the year, I started getting more and more work — which is good — until I realised mid-year that I was doing a little too much. Things settled down to something more comfortable for the rest of the year, and overall 2011 can be counted as successful.

I thought that much the same thing was happening in 2012. I was certainly just as busy. But I’d started doing more unpaid media work, including 54 radio spots, three TV spots, and guest appearances on 17 podcasts. I also did eight public speaking gigs, although some of them were paid:

Fun, yes, but I didn’t realise that my overall production rate had dropped from around 15 paid media objects per month to just 10 or so. That was the difference between a moderately comfortable profit and struggling to make ends meet.

During 2013, this would all be solved with planning, that was the aim. Except no, that didn’t happen. January was a failure. Planned income vanished, and I ended up spending too much of my own money. Then February brought with it a couple of personal concerns — which in hindsight can be seen as the final triggers of a serious depression episode, indicated by the orange marker — and after that, my production rate fell well below 10 per month.

My severe depression wasn’t diagnosed until early July, indicated with the green marker. There was an increase in productivity after that, although some of the Corrupted Nerds stuff was unpaid. There was also a decline in productivity towards the end of the year, thanks to mood swings caused by medication changes, plus other factors — such as having ramped up my workload too quickly. Hindsight is a wonderful thing.

Here’s a chart breaking down the income from my media work by masthead, comparing 2013 to 2012. 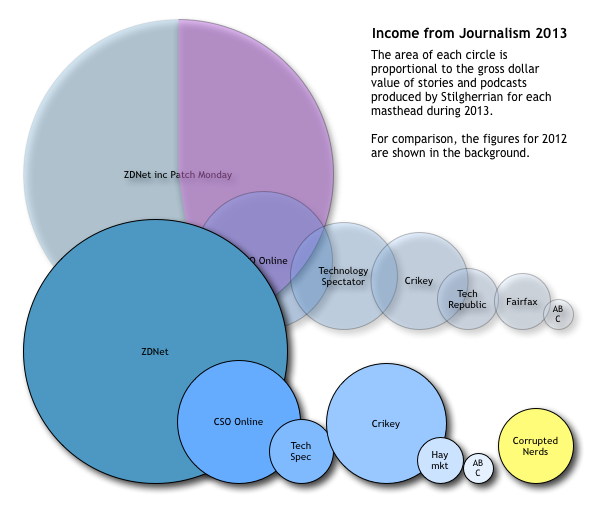 There’s another interesting sign that 2013 represented decline: there were no speaking gigs, the media appearances dropped to 29 radio spots, and I only did guest appearances on three podcasts. The one thing that did increase was TV spots: I did eight in 2013. That said, I hosted a video interview for iiNet, and presented guest lectures at University of Technology Sydney.

The fact that I generated new income via Pozible, shown here in yellow as being allocated to Corrupted Nerds — and that circle represents only the half that was used for story-generation, not the half that covered flights and accommodation — is one positive sign that things are finally turning around.

Another sign of the turnaround is the column for January 2014 in the first chart, the one showing that the number of media objects produced last month matched that of previous Januaries. OK, it’s not an increase, but at least it’s not a decline. And that’s a start.