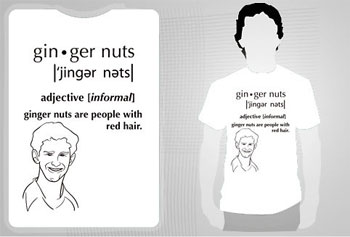 The headline says it all.

Once upon a time, in a galaxy far away, I was a member of the Society for Creative Anachronism (SCA), an international organisation dedicated to the study and recreation of pre-17th century European History.

Hard-core members of the SCA take it Very Seriously Indeed. It’s far more than the occasional feast in medieval clothing. The SCA has the richness and complexity of a miniature medieval society. Globally, it’s a set of feudal kingdoms, and the Kings and Queens really do rule with absolute power — well, within the boundaries of the game, and for only a few months each.

I was one such hard-core member for a decade or so, with a particular interest in medieval heraldry — both the art and science of designing people Arms (heraldic insignia), and the ceremonies and protocol of the Royal Court. 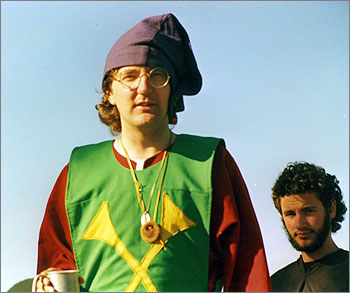 That’s my SCA alter ego in the photo, Gereint Scholar. The green over-garment is the uniform of a working herald. The sidelight tells me it’s early morning, so I was probably making routine announcements to the populace, and the tankard probably contains beer. The purple cap was my constant companion. I’m wearing two medallions. One is the “silver” (actually pewter) Leaf of Merit, given for service, and the other is a slowly-disintegrating Arnott’s Gingernut biscuit.

Actually three people had been exceptionally silly, and Queen Anastacia decided we were to be punished. Now Anastacia likes Gingernut biscuits, specifically the ones made in Australia by Arnott’s. Everyone knows this, and gives her packets of them every time she visits. Far too many packets of them. This had become a running joke throughout that particular event, so Her Majesty decided to continue the joke.

Me and my two accomplices, Reynardine du Clifford and Robert Gordon of Ravensbrook — i.e. the usual culprits — were summoned before the Queen. Our punishment was given: we were inducted to the Royal Order of the Gingernut, and were commanded to “wear this biscuit until it falls from its string”.

It was a delightful piece of Royal Silliness. The assembled populace laughed at our expense. We laughed too. And by the end of the weekend Robert had spilt beer on his gingernut, dissolving it, and Reynardine spent too long in the rain, dissolving his. 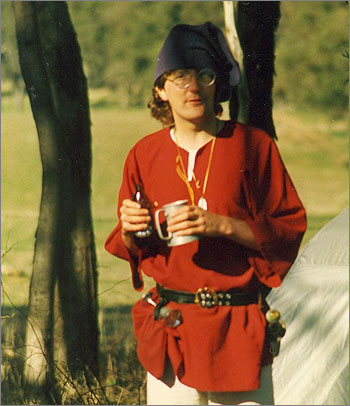 I, however, was conscious of the Royal Order’s status as, well, a Royal Order. I chastised them for not taking care of their award insignia. I resolved to take good care of mine…

I wore my gingernut on its string with pride, at every SCA event, constantly, for a year — until eventually it cracked irreparably and did, indeed, fall from its string. There was much sadness.

Stop Press: Yes, we can confirm that the tankard contains beer. I’ve found another photograph taken even earlier in the morning when I’m just emerging from my tent. I have not yet started duty as herald, so I’m not wearing the green over-garment — but I can be seen holding the tankard in one hand and a bottle of beer in the other. Since the SCA’s rule is “no post-17th Century technology on site”, I would have decanting the beer into the tankard rather than take a modern bottle on-site.

15 Replies to “Two facts relating to Ginger Nuts, and an old story”