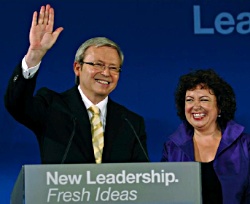 I made eight predictions…

1. The Joy of Chairman Rudd’s Iced VoVo Revolution will be dulled by the end of January when they take some stupid actions which demonstrate that they are, after all, politicians like all others. Actually, this has already happened with the announcement of mandatory Internet filtering by ISPs. I’ll write more about that soon.

ALMOST-RIGHT. I’ll count half a point here. It took longer than January for the post-election glow to fade. I’d put it around March, when disappointment with the spin-doctoring of the Australia 2020 Summit started. However I was right in suggesting that Internet filtering would be a problem and I ended up writing a lot about that.

2. At least one member of the (former) Howard cabinet will be charged with a criminal offence over something they did in office. I’d like it to be Brendan Nelson, because that deal to buy $6 billion worth of Super Hornet fighter aircraft stinks — mostly because the air force doesn’t want them and the process was, erm, rushed to say the least. However I suspect it might be something to do with the AWB scandal.

WRONG. It seems the NSW state government is the one which is imploding.

3. Channel 7 will continue to win the Australian TV ratings. Channel 9 will fail to reinvent itself now that its owned by an investment vehicle and not a media proprietor.

RIGHT. Channel 7’s ratings victory has been decisive, and Channel 9’s program schedule is filling up with cheap game shows.

4. Telstra will be forced to separate its wholesale and retail businesses. Meanwhile the Sol Trujillo-led management team will continue to play nasty with the government, causing them to be increasingly sidelined — especially over the Rudd government’s new broadband rollout.

WRONG. The battle still quietly rages over Telstra’s structural separation, and the organisation is increasingly irrational. I was right about the continuing nasty plays by Telstra, wrong about the separation happening this year — but only because the Rudd government has been appallingly slow to take action about anything.

5. Barack Obama will win the US Presidential election. I know Hillary Clinton is currently the favourite, but I have the gut feeling that the Oprah factor will be important, and that Hillary’s dirty washing will be aired.

RIGHT. I don’t think it was “the Oprah factor” so much as the desperate need for change in America — what we Australians would call the “It’s Time” factor. I’m still rather astounded I picked it, though.

6. When former Thai prime minister Thaksin Shinawatra returns from self-imposed exile on 14 February the new government, which is a coalition led by a Thaksin-supporting party, will somehow drop the corruption charges against him. Another military coup will follow.

WRONG. Thaksin did return to Bangkok and was promptly arrested and released on bail. Then, when he was given his passport back to visit Beijing for the Olympic Games, he did a runner. But he was found guilty of corruption in absentia and has said he will not appeal the two-year prison sentence. He’s currently in Dubai and will announce his plans on 14 December.

7. At least one Australian company will suffer a major leak of its customers’ private data, prompting new laws on dealing with such things (like they already have in California).

WRONG. I still think this is a problem waiting to explode.

8. We’ll finally figure out what the Storm Botnet, the world’s largest network of hacked computers, is for. My guess: whatever the hell the designer’s paying clients want it to be for.

RIGHT. The Storm Botnet was rented out mostly to spammers, and some estimates reckon 20% of the entire global spam output originated there. Researchers hijacked part of the network and reckon spammers could turn a profit with a response rate of less than one in a million.

I’ll make my predictions for 2009 closer to the New Year.