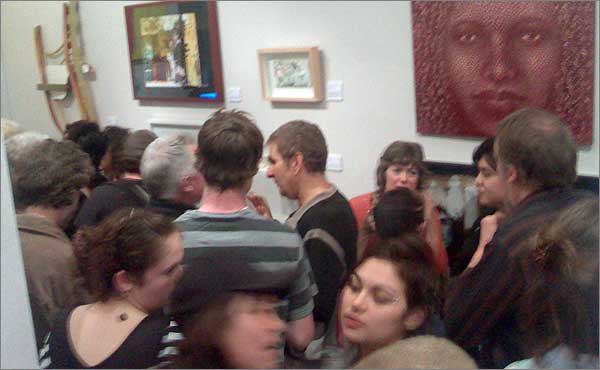 “Just how many people can you pack into one tiny art gallery,” I wondered as I squeezed through At The Vanishing Point‘s winding displays to find a drink.

The launch of the inaugural Marrickville Contemporary Art Prize was an upbeat but slightly chaotic affair last night, with 61 works packed into a narrow gallery space and probably every contemporary artist in the village jammed into a narrow corridor trying to reach the dodgy chardonnay and too-few spring rolls being served in the back yard.

’Pong’s Red Sofa didn’t win anything, but it was interesting to note how many of the winners were video installations and ceramic and mixed media works rather than “straight” paintings, photographs or sculptures.

I also thought most of the higher-ranked works tended to pack more Big Concepts into one piece, trying to tell a lot of stories all at once, rather than the clear exposition of one thought. Perhaps that’s just my preference for visual minimalism.

And the winners are…

First Prize: Shuhei Nishiyama, SHOT — Sabotage Syndrome
Highly Commended: Nicole Barakat, Coming Home Story; Somchai Charoen, Out of Service
Commended: Goran Tomic, “The Anatomy of the Possessed” (x-ray of the artist possessed by the spirit of Joseph Beuys); Pierre Cavalan, We are more similar than we are different

One Reply to “Contemporary art for sardines”