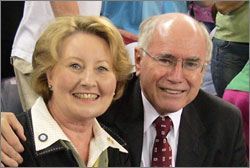 How can I be expected to do any “constructive” work today when there’s such wonderful entertainment on offer: the Howard government imploding so, so fast.

Spend some time looking at this photo of John and Hyacinth (left) in happier times, the 2006 Commonwealth Games in Melbourne, because there may not be any more happy times for these two.

(Even in this photo, though, it looks like our Prime Minister would rather be somewhere else — though Hyacinth seems to be, well, excited.)

Even in the few hours since I suggested Malcolm Turnbull would be the Coalition’s best choice to fight a rearguard action, and about Howard’s submissive body language, there’s been two fascinating developments.

Crikey has published an analysis of the Liberal’s own Crosby/Textor polling, which seems to have been leaked to everyone and their dog.

Lots of fascinating graphs, but the summary tells it all:

Howard has conceded the election, but hasn’t told his marginal seat holders.

Talk about an election being a circuit breaker is simply for internal Coalition consumption.

The Liberal leadership knows they’ve lost. They’ve conceded the election, which is why they are running a firewall strategy.

They have lost but cannot tell their own marginal seat holders because a riot will break out and turn a defeat into destruction.

He has been in the top job for more than nine years and is the longest serving of all current state and territory leaders in Australia.

Mr Beattie says he believes leaders should stay in the top job for about eight years, but he stayed beyond that because he wanted to see three major projects completed or well under way…

John Howard, for all your talk of decency and doing the “appropriate” thing, you’ve turned into Gollum. It’s to pass Your Precious to someone else.

On the other hand, do feel free to continue as you are. Because, as I say, it’s wonderful entertainment!

8 Replies to “Watching the government implode”