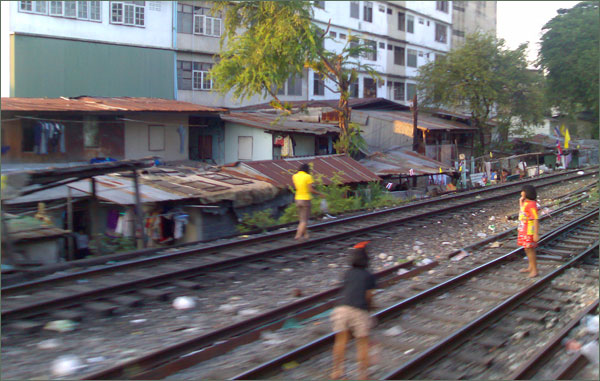 ’Pong’s movie Bangkok Express slices through the city at the height of the motorway. Yes, you can see urban decay, but it’s abstract, in the distance. The train slices the city differently: just above human eye level.

The photos I took from the train in Bangkok reminded me that a sign at Ashfield Station in Sydney has got it all wrong. That sign tells us that railway stations are for catching trains — and if I’m not catching a train right at that moment then I’m not welcome. I might be a terrorist. Move on, nothing to see here.

Railways are the Grand Physical Arteries of the Industrial Age. While we can catch trains at a station, yes, we can also pause to marvel at this expression of industrial confidence. Railway signalling, for me, was a childhood geeky fascination. How do you keep this whole system running without crashing? Switching, signalling, communication, plans, timetables — all the things that computers do, but laid out before you on a scale you can comprehend.

And, as this photo (above) reminds us, in many countries today the railways are still all of that, and more. Here, they’re a walking path, a playground, a rubbish dump — the streets of Bangkok are swept clean daily, but not the railway — and in some cases a home. Where officially-sanctioned housing ends at the edge of railway land, the slum begins. Clearly, it’s been there for years.

CityRail, how dare you narrow the horizons of the next generation, so the railways are nothing more than a place to be herded, sheep-like, from point A to point B. They’re our railways, and if we want to stand and watch for a while, we will.

[P.S. Out of 9 “Unreliable Bangkok” pieces so far, at least 3 have featured transport. I suspect it’s because being a passenger gives you time to pause a reflect upon what you’re seeing.]