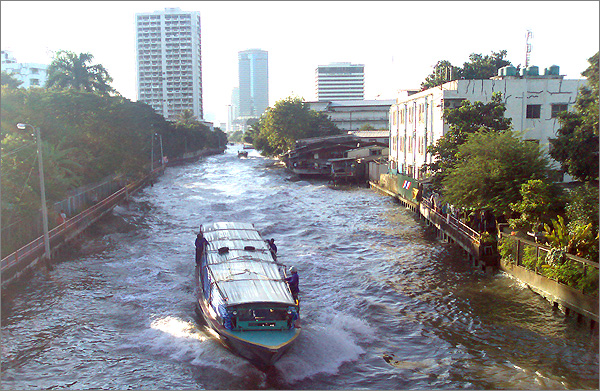 When I arrived in Bangkok a fortnight ago, the first thing I noticed was the smell. But before I discuss matters of odour, let me explain how I’ll bring you my traveller’s tales…

As I’ve mentioned before, I wanted to spend my time in Thailand experiencing the country, not writing. I didn’t want to see it through the viewfinder of a camera either, but directly with my own eyes. So I didn’t take notes, and my only photos are a few pimple-cam images for reference.

Now that I’m back in Sydney, I’ll write a daily essay. Each one will be a personal, even idiosyncratic reflection. I probably won’t write about tourist things. Indeed, ’Pong and I avoided most standard tourist sites. But without notes, this will be an Unreliable Bangkok memoir — hence the title.

’Pong and his friend Yo met me at Suvarnabhumi Airport (ท่าอากาศยานนานาชาติกรุงเทพ-สุวรรณภูม) late on a Monday night. I wound down the window of her small sedan and the smell hit me. At first I thought it was smoke, something like wood burning but not quite. But the smell stayed with us as we took the expressway west towards central Bangkok and I started to notice its subtle complexity.

Smells trigger memories. The smell of Bangkok triggered memories of mangrove swamps, or that black, sticky mud that collects near weed-filled rivers. And of course Bangkok is a river city, sitting on a broad flood plain and threaded with muddy and sometimes stagnant canals like Khlong Saen Saeb (คลองแสนแสบ), the one in the photo.

I’m far from being the first person to notice Bangkok’s unique smell. In London, Xanthe lists “as you step outside the airport doors in bangkok” as one of her favourite smells. Conversely, Werewolf doesn’t seem to like it — but he grew up in the fresh air of the Atlantic coast, so I can understand. Plus his description is wonderfully detailed.

For me, that first smell of Bangkok said “You are now in a strange land,” the first real message that I’d left Australia. It wasn’t unpleasant, just different. It was exciting, too, because it told me there’d be more to discover the next day, once I had sunlight to see by.

By the way, that boat on the canal is part of the Khlong Saen Saeb Express Boat service. I’ll have more to say about that in another essay.

Smells… If you know Bangkok, what are your thoughts on its unique smell? And what other places have their own unique smell?