“That ‘This is Not Art’ thing this weekend, it’s like a fucking freak show walking past,” says the old guy in the yellow-tiled front bar of The Clarendon Hotel.

It’s just gone noon on Saturday. Apart from ’Pong and I having a burger and beer, he’s the only customer. His worldview of what Newcastle‘s Hunter Street should be like is challenged by the stream of paste-white black-clad comic fans, straggly-bearded eco-hippies, random hipsters and nose-ringed alternagothpunkteendykes strolling past the boarded-up shopfronts.

Noticing a skinny guy wearing yellow overalls and a torn red-striped t-shirt, our frowning drinker puts down his VB. “Hey, is there a circus in town? Because I can see a clown”, he calls out to the barman.

The barman smiles politely, but says nothing.

“Hey, is there a circus in town?”, he mutters, and takes another sip. He looks out at the soulless office buildings that replaced the landscape of his memory, in silence.

Yet these weird out-of-towners, with their experimental robotics, knitting and YouTube mashups, have brought more life to this industrial city’s ailing heart than any grandiose “development” plan.

As night falls they, like us, wonder why there’s virtually nowhere to eat. One Balinese restaurant, full up. One café, the Bogie Hole — named after a nearby ocean rock bath and not what you just thought — stays open to a decadent 8pm. On a Saturday. Then the streets empty. Suburban pubs close and disgorge drunken hordes, who then flood to CBD beer barns to drink even more, fight, vomit and stagger home.

Next morning, we see how Newcastle reckons it’ll save itself. Ah, Honeysuckle! “The Hunter’s premier waterfront playground.” 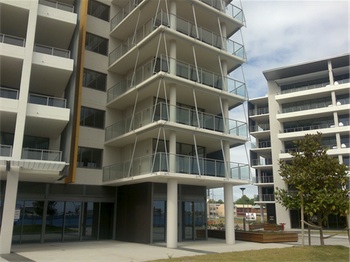 It’s exactly like every other premier waterfront playground everywhere else. Boxy big-windowed apartment blocks, distinguishable from each other solely by the colour of the concrete panels, or perhaps the angle of the posts supporting motorised canvas awnings.

At ground level, such unique features as umbrellas bearing the names of Italian beers, a Hog’s Breath Café, a Subway store, a bar called “isobar” in lower case.

Two floors up, a blond boy maybe eight years old has breakfast with his younger blonde sister, sitting on blond-wood designer chairs at a blond-wood designer table while their platinum-blond mother flips through the catalogs. Perhaps there’s just one more thing she needs to buy to complete her perfect premier waterfront lifestyle.

Outside, tugboats shepherd the 75,000-ton Panama-flagged bulk carrier Energy Trade and another fifty thousand tons of coal out of the world’s busiest coal-shipping port, bound for Yokkaichi, Japan. Another, the Cypriot Pedhoulas Merchant, leaves less than two hours later for Tachibana. The empty 150,000-ton Hanjin Madras is brought in to take their place.

Marcus Westbury, who founded This Is Not Art a decade ago to showcase independent, emerging and experimental art, tells me there’s no residential real estate slump here. Expensive residential properties like Honeysuckle are being built and occupied, but they’re clustered around an empty commercial core.

“There’s one big problem with how Newcastle’s been thinking about how it’s going to fix itself: that some big mega thing will arrive fully formed and make that end of town interesting,” he says.

The Fix Our City consortium, for instance, supports a plan to rip out the railway to Newcastle station that separates the old CBD from the waterfront and replace it with a massive new development. The developers wave some push-poll claiming “93% of the public agreeing with the need for change.”

As an outsider, I can’t help but think deliberately destroying a working, historic transport link is nothing but a land grab.

Meanwhile, Westbury has been showing us Renew Newcastle. Frustrated with seeing buildings lay empty for years, he founded this project to organise artists, cultural projects and community groups to use and maintain these buildings under license until they’re commercially viable or redeveloped. So far it’s supported three dozen projects ranging from craft and fashion galleries to an animation studio and a tea house.

“The barrier to entry is capital,” says Westbury, noting that urban development processes are geared to big projects. “If you make it possible for people who don’t have money to be able to do things, then a whole new range of things become possible.”

[This article was originally written for Crikey — which explains the “mainstream media style” in parts — but it was bumped when a far more newsworthy Letter from The Phillippines arrived, chronicling the country’s terrible natural disasters. This is an edited and expanded version.]

12 Replies to “Letter from Newcastle”