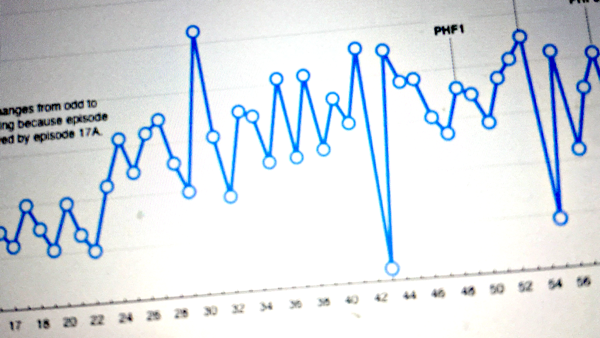 I’ve been analysing the time it takes to produce each episode of The 9pm Edict podcast, and the results are disturbing.

Well, they disturbed me.

Audio recording is a relatively small part of the process. My workflows are inefficient, because I’m always playing with the format rather than settling into a routine, let alone automating things.

On a personal note, lack of confidence sometimes slows the creative process. Thanks, brain. I also spend more time fussing over the audio mix than is probably warranted.

The time taken to produce each episode is usually 10x or even 20x longer than the finished podcast. The crowdfunded budget falls way short of proper compensation. And that doesn’t even take into account the time taken to do that crowdfunding.

What I just said, but with charts, and much more background information.

When I started the Edict in 2010, I thought it might appear twice a week, with episodes being 15 or 20 minutes long. But the podcast soon became less frequent, even intermittent. Meanwhile, the duration increased, with episodes sometimes running for more than an hour.

(If you’re having trouble reading the charts, I’ve also created a PDF file of all three.)

The three Public House Forum episodes, marked “PHF1” through “PHF3”, are amongst the longest, but this Saturday’s episode will be the longest by far.

Since episode 22, I’ve also been keeping track of how much time it takes for pre-production, recording, and post-production.

That includes the initial brainstorming of ideas and gathering of audio grabs, and then the scripting, recording, editing, and mixing. The audio files then have to be compressed and uploaded, to SoundCloud and Spreaker as well as my own website, and the web page needs to include all the credits and some graphics.

The Public House Forums aren’t necessarily the most time-consuming, because sometimes I get thoroughly carried away with some silly joke. Or I go on an excursion to Cronulla. Or the pub. Or I’ve made a workflow error and have to re-do a chunk of work.

Nor are the longest episodes necessarily those that take longest to produce.

One useful measure is the ratio of production time to the duration of the finished output. And here’s a picture.

By this measure, the Public House Forum episodes are relatively efficient. Indeed, PHF3 only took so long because I’d made a mistake with audio settings during the live recording, and I needed to manually “fix it in the mix”.

No, the most inefficient episodes by this measure are those with a lot of little audio grabs to download, edit, and script around. It takes me longer to do that than ABC Radio, say, because they have an integrated audio archiving and editing environment on a fast network, whereas I’m searching for news stories and downloading audio and video files over shitty internets.

Not that I’m one to complain.

I’ll dig further into this data, and add notes in the comments. But for now…

An episode of the Edict typically takes between 10 and 15 hours to produce. Add in some management time, including analysis like this, and we might as well call it two working days.

If that sounds a lot, remember that the Edict isn’t just a couple of blokes grabbing some news clippings, sitting in front of microphones, recording whatever the fuck comes out of their mouths, and dumping in onto the internet.

These figures are much the same as for comparable radio programs, given that they’re usually not one-person productions, and someone else is providing an efficient working environment.

Apart from my time, I also supply the equipment. It’s not megabucks, but it does mean that I’m not an employee here, nor even a contractor, but a production company.

I haven’t done detailed costings, but I note that back in 2011-2012 the Media, Entertainment & Arts Alliance’s recommended rates for a freelance photographer was $911 per day. For a photojournalist or video journalist, it was $1135 per day. Plus “reasonable out-of-pocket expenses”.

All these costings are obviously based on the Edict being an income generator, not merely paying its own way, rather than being a hobby. That was always my intention, and I’ll put some effort into making that happen over the next few months.

As I said on ABC Radio’s Media Report, I firmly believe that small media operations like the Edict can be audience-supported, just like community broadcasters. It’s all about how you build your audience, build your community, and induce them to open their wallets to pay for something they want.

Meanwhile, I’ll also be pimping out my production services.

Thank you for listening. Now give me some money.