In just two months, Twitter has become one of my core communication tools. Non-Twitter instant messaging and Facebook have all but disappeared from the mix. Here’s why.

Actually, before that… If you don’t use Twitter, or if you’ve taken a look but don’t “get it”, watch this 2.5-minute video Twitter in Plain English from those wacky Canadians Common Craft. Love their style.

Like the character in the video, I was sceptical about Twitter. Why do people need to know every little detail of my life? Who cares? I said as much to Perth’s Twitterati late last year. But then I actually tried using it — and I “got it” immediately.

It’s not about what people need to know, but what they want to know. And, as the video, says, the people who care about you are interested in what you’re doing. 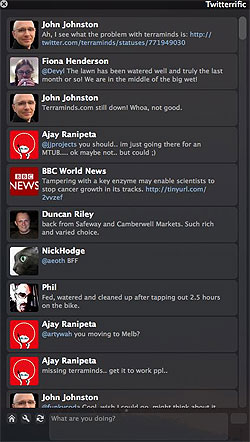 Calling this service “Twitter” was genius. Listen to real birds twittering, especially during their dawn chorus, and you’ll hear a constant stream of status messages. “I’m alive and healthy.” “This is still my territory, stay clear.” “I’m hungry, feed me.” “I’ve found some food over here.” “Storm coming! Quick! Quick!”

None of these messages necessarily requires an answer — just like typical tweets on Twitter. But you can act upon them or reply if you want.

Twitter is, almost literally, the background clucking of so many chickens.

If you need to concentrate on work or a TV program, just tune out. It’s a permanent window onto my world — but that doesn’t mean I need to sit and watch what’s out the window all the time.

I also have tweets coming from ABC News, BBC News and 37signals (which tell me if there’s a problem with Basecamp). One courier company uses Twitter to inform customers of any delays.

The key factor is that Twitter adheres to the philosophy of small pieces, loosely joined. It’s a clear, simple tool that’s easy to connect to other tools.

Twitter helps me distinguish between the things I want to publish for all time, like my longer essays, and the random day-to-day stuff which might be vital at the time but meaningless the next day.

OK, I’m still having trouble with that, because some tweets are worth keeping. But this is experimental stuff.

What do you think? If you already use Twitter, does your experience match mine? If you don’t, please join Twitter and follow me, and let me know how it goes.