Can’t put up billboards in a park? No problem! Just say they’re “set dressing” and you’re making a TV commercial — even if you’re not. That’s precisely what Audi did in Toronto to advertise the new Audi TT. 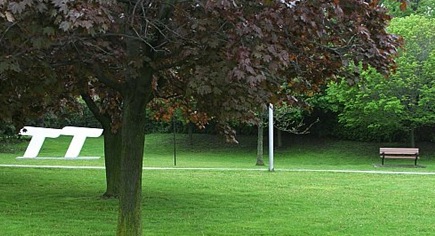 Audi got permits from the Film and Television Office of Toronto to shoot a commercial that would allow it to place 2-metre high double “T” statues all over the city. Except there was no TV commercial… 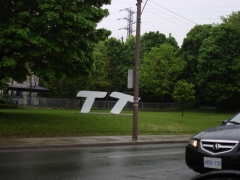 The activists at IllegalSigns.ca, where you can see more photos, are not amused:

After being up for only hours, many of these signs have already been toppled, tagged and de-vandalized, like the sign in the top left photo above. After all, the signs aren’t exactly built out of re-enforced steel. We applaud civilian enforcement of the city’s by-laws. No shoot can possible be all around the city all at once. [sic] These are illegal ads. We’d like to see somebody smash the signs rather than smash a bunch of Audi TTs at Downtown Fine Cars, but don’t let us stop you.

The campaign also includes rural installations, with the letters carved into farms and grasslands in areas just outside urban centres.