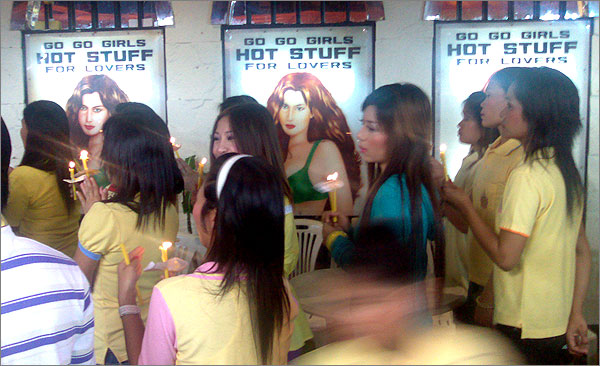 Our last night in Bangkok happens to be the 80th birthday of King Bhumibol Adulyadej (ภูมิพลอดุลยเดช). The TV will have shown you the official celebrations of the world’s longest reigning monarch but, as usual, ’Pong and I chose a different path.

Instead of joining the squillions of yellow-clad Thais in the streets of the old city, we were on the notorious Patpong Road in the Silom district. The soi (ซอย) was lined with bar girls and ladyboys and rowdy street vendors — all wearing yellow shirts and holding yellow candles — plus a few confused-looking tourists.

’Pong has some great photos, taken when the video screens which normally show adverts for the girlie shows instead beamed us images of the King in all his finery. We all held burning candles, and those who knew the words (i.e. every Thai) sang the Royal Anthem, a song traditionally sung on royal birthdays and a third, new celebratory song, We love the King.

Very moving, though I wanted to knife the tiny handful of inconsiderate tourists who barged their way through the singing. Most, however, were soon handed a candle and joined the happy throng. Many had even bought their own yellow shirts earlier in the day.

Five minutes later, we were once more being offered ping-pong shows and “sex DVD, sir?”

5 Replies to “Long Live the King!”