Hypocritical drug laws, as demonstrated by a UK parliamentary committee. This drug danger league table courtesy of New Scientist magazine shows the relative danger of various drugs, legal and illegal, based on a survey of people’s opinions of their relative harm. 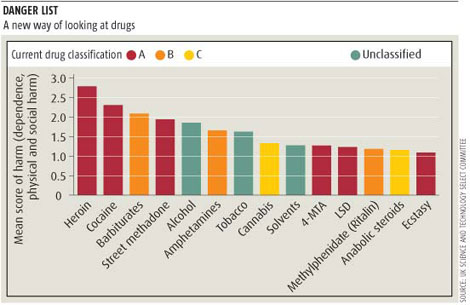 UK law categorizes drugs to reflect the penalties for possession and dealing. The highest category, class A, includes heroin, cocaine, ecstasy and magic mushrooms. But this research puts alcohol in the top five most harmful drugs, along with heroin, cocaine, barbiturates and street methadone.

Ecstasy, currently a class A drug, comes well below both tobacco and alcohol. And as New Scientist has editorialised before, it’s so “safe” that if put through the approval process as a medicine, ecstasy could be sold in corner shops!

Presumably as a result of this research, one of two things will happen:

Neither of those scenarios is likely to happen any time soon. But if drugs are banned to “protect” society, then the scale of penalties must reflect the scale of the danger. Currently they’re well out of alignment.

[Update 21 February 2012: Since this post was first published, I have discovered that this chart wasn’t based on any scientific evidence at all, but on a survey of people’s opinions of the substances’ relative harm to society. I thought I’d better clarify that, as some people have been linking here and been misled by my original wording.]