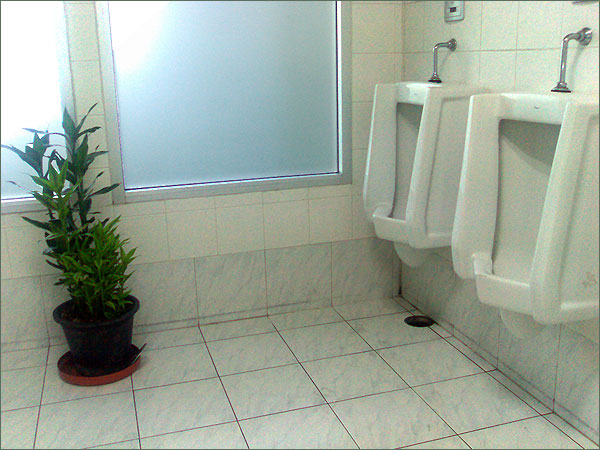 I’ve mentioned before that our time in Bangkok wasn’t your typical tourist experience. One day, for example, we spent six hours in the Don Mueang district government offices. Here’s a photo of the men’s toilet.

Thailand has a general election on 23 December. It’s important. Well, all elections are important, but this one is the first under the new constitution, and the first since last year’s military coup. ’Pong needed to register to vote from Australia. But there were complications…

And so, on a sunny Thursday morning, we took the Bangkok Skytrain to its northernmost station, Mo Chit, and then a cab to Don Mueang to meet Khong who, sensibly as it turned out, had taken the entire day off work to deal with this. 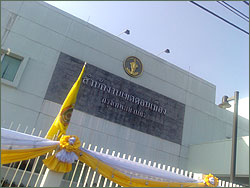 The district government offices are a grey marble building at the side of the highway north and, apart from minor Thai design elements, much like government buildings everywhere — apart from being draped in yellow for the King’s Birthday.

Inside, the staff were your typical public servants doing the usual public servant thing: slowly processing paperwork as people waited for their number to be called. With the election fast approaching, they were busy with voter enrolments.

It was quaint to hear the sound of a dot-matrix printer, though, and to watch one chubby girl with glasses, a clerical assistant, dividing up the output from a continuous-feed 132-column line printer. A young child ran from desk to desk — obviously a family-friendly workplace!

We were advised that we should go and have lunch.

Being Thailand, there were food stalls across the road. We chose the one with the most public servants. I wondered why the walls had photos of old aircraft — Ford Trimotors, DC-3s and so on — as well as a huge model of a Lockheed Tristar. It turns out the head of this family business is a retired aircraft maintenance supervisor from the nearby airport with 40 years service. They’re “his” planes. We exchange aviation gossip.

After lunch, a walk through the suburbs and some high-quality waiting around in the office getting bored, we were finally graced with the presence of the district manager and we soon had the requisite signature (pictured). Just one more short queue for a photo and a new ID card — and paying the crippling 20 baht fine for letting the old card expire (about 70 cents) — ’Pong’s identity was restored.

We caught the train back to central Bangkok. I’ve already posted one photo from that journey, but I’ll have more to say about trains soon.

Why the photo of the toilet? Well, I was the only farang in the entire building, and was already attracting attention. I seem to recall some Australian government travel warning about taking photos in foreign government buildings — and I believe everything our government tells us.

[P.S. I’ve decided that these memoirs are unreliable not only because I didn’t take notes but also because they’re failing to appear every day as promised. If this disturbs you, I’ll give you your money back.]