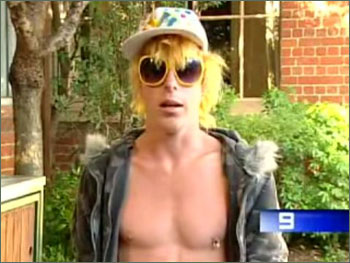 Any promoter would be pleased with a turnout of 500 for a simple house party with no outlays, just an invite sent out on MySpace. But then a helicopter arrived on the scene, some police cars got damaged, Mr and Mrs Delaney found out, the neighbours were p-ssed off and the Police Commissioner called a press conference.

It looked like Corey was set to be devoured by a salivating news pack. The sixteen-year-old came with shades, a naked friend running down the street, a pink doona doubling as sarong, and the quote “I can’t remember. I was just off my head”.

Crikey lists much of the good media coverage — including a talkback caller who somehow managed to blame John Howard. For me, though, the highlights are The 7.30 Report‘s serious piece (including child psychologist and police youth worker), and A Current Affair‘s Leila McKinnon doing the extended interview .

The irony is, today the Victorian claim their tougher new powers to target rowdy behaviour around Melbourne nightspots have been a great success.

[Update 16 January 2005: I’ve changed Corey’s surname from “Delaney” to “Worthington”. Apparently Delaney is his parents’ surname but not his. Or something.]

7 Replies to “Corey Delaney, freedom fighter (for the right to party)”