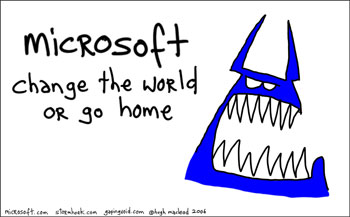 So what do you think of Microsoft, eh? No, really. I want to know.

I have to admit I’m not exactly a fan. I’ll explain why momentarily. But Microsoft is changing, or at least wants to change, and I’m finding it hard to shed old impressions.

The Blue Monster cartoon is part of this changing Microsoft. Its creator, Hugh MacLeod, intended it as a conversation-starter — what he calls a social object. Steve Clayton from Microsoft UK says they use it to help Microsoft start talking about its own process of re-birth.

I’m cynical when software companies claim grand goals like “changing the world”. That over-the-top rhetoric was central to the first dot-com bubble. Usually, the bigger the rhetoric the crappier the product. Still, I’m willing to listen.

Another sign of a changing Microsoft is my friend Nick Hodge, who sold me my first Mac back in 1985. Nick now works for the Blue Monster as an “enthusiast evangelist”, and represents how Microsoft is embracing blogging and a new culture of openness — and actually having conversations with people instead of talking at them.

But can Microsoft really change and, more importantly, convince us to believe them?

Openness and transparency are important to me. As an old-school geek, I absorbed the principles of openness that built the early Internet. Bill Gates’ infamous 1976 letter to computer hobbyists expressed a commercial attitude that was at odds with that openness.

It irked me that Gates went on to become the richest man in the world by selling what I considered to be second-rate software using questionable business tactics.

I reckon the best, truly innovative software is created by awesomely-intelligent individuals or small, focussed teams like 37signals. Microsoft’s industrial-scale development process, with armies of cubicle droids, seems incapable of producing anything other than bloated, overly-complicated and buggy software.

Certainly my business clients running Windows generate far more support calls than those using Macs. Now that Apple has added what for me was the one missing feature, I intend returning to Apple’s productivity software rather than using Microsoft Office for Mac.

But, as I say, these are existing or old impressions. A young Microsoft employee told Hugh MacLeod that a lot of the culture shift inside Microsoft is generational.

Now I’m writing about this today for a reason.

Nick Hodge has invited me and a few other geeks to dinner tomorrow with Joe Wilson, Worldwide Director of Microsoft’s Academic and Enthusiast Evangelists (of which he is one). So, I know what I feel about Microsoft, and I’m interested to hear what he’s got to say — over a nice wine or two at Macchiavelli.

What do you think about Microsoft, and how would you like to see them change? Can you think they can do it?

8 Replies to “How can Microsoft stop us hating them?”