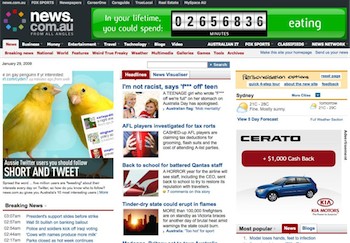 All I know about the selection criteria is that journalist Andrew Ramadge (@aramadge) says the list was chosen by news.com.au staff and was by merit rather than number of followers.

Clearly the story is aimed at people who’ve never used Twitter. There’s an obvious What is Twitter? link. Fair enough, there’s fewer than 1 in 5000 Australians using it so far.

Picking just 10 people to appeal to a mainstream audience is a tough call, but reactions on my Facebook profile were harsh. I’d link directly to the item but I can’t figure out how to do that so you’ll have to go digging.

Now it’d be much easier for me to comment if I wasn’t on the goddam list myself, but I am, so take that on board however you like. I’m certainly not saying there’s other people who aren’t also “worthy”, or “important” or “well-known” or “they’re a good friend” or “they’re nice”. And Twitter is indeed representative of an important new mode of human communication and it’s fascinating to talk about social media — if you’re a social media consultant.

The criterion was “interesting”. To a mainstream, non-geek human. Bearing that in mind, what you you think of the list?

Please suggest away. I’ll link to people’s Twitter profiles for you, possibly after some delay.

13 Replies to “I’m interesting… and you’re not”