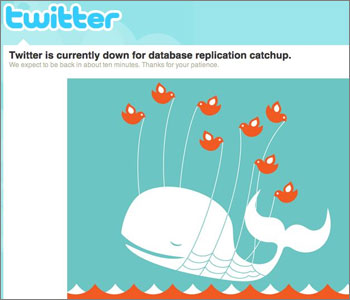 As I write this, Twitter is down for a “database replication catchup”. Sounds technical. As I hinted before, and as Kate Carruthers agrees, it’s make or break time for this most cool of messaging services.

It’s ironic that Twitter’s ability to connect us humans into an almost-instantaneous global network was a core theme of Mark Pesce’s keynote presentation at Microsoft’s ReMIX 08 last week. The very week he extols Twitter’s strengths, it collapses. And they don’t know why.

At least Twitter has responded to community calls for more transparency.

In Twittering About Architecture, Alex Payne admits they built it wrong from the beginning.

Twitter is, fundamentally, a messaging system. Twitter was not architected as a messaging system, however. For expediency’s sake, Twitter was built with technologies and practices that are more appropriate to a content management system. Over the last year and a half we’ve tried to make our system behave like a messaging system as much as possible, but that’s introduced a great deal of complexity and unpredictability.

I don’t need to repeat my call for less haste in web development — and in the world generally — do I?

Twitter has just received another $15M investment. Take the time to get it right, guys. But quickly.

3 Replies to “Twitter’s having a whale of a time”